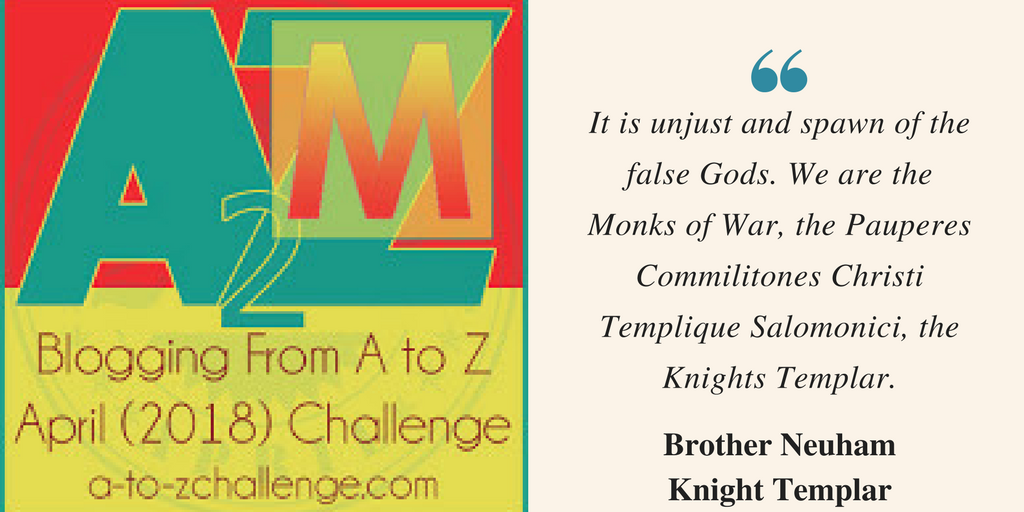 “When men raise armies to fight for Gods, nothing good can come of it.” Xalordryn Beltalyon, Dökkálfar Warlord at the privy Council of Elves.

In front of them stood four bearded apparitions. Each wore chain armour with white mantles and surcoats, both of which carried deep red crosses. They were two abreast, to either side of an altar bearing two large candlesticks with a gold crucifix centred between them.

Steel helmets rested in front of each warrior. On each wall two sconces held torches that burned, as did the candles, with a spectral white light belonging to centuries past. They lit the room with a soft out of time glow, flickering and sending shadows creeping in all directions. Opposite the two onlookers, and to each side, in the middle of the walls were oaken arched doorways leading off into unseen vaults and crypts. Catacombs and chambers rich in both the honourable dead and treasures of an Order long since broken.

Above the furthest door was an inscription carved into the stone and taken from the treatise of Bernard of Clairvaux entitled “De Laude Novae Militiae.”

The knight who protects his soul with the armour of faith, as he covers his body with a coat of mail, is truly without fear and above reproach. Doubly armed he fears neither men nor demons.
“Brothers, we are now sealed within. The entrance obscured until the purge is done. The Knights Templar, as an Order, is dead. The Masters are taken and our comrades tortured into blasphemous confession. It is likely this will be our tomb.”

Extract from “Letters of The Amanuensis – The Order of War Monks, Arch Mage Eldred Mortain –

This tome was ponderous. Much pertaining to Gods and The Knights Templar.

A vision had drawn this book from the legion held in this one library annexe. Not one directly of those upon the human world, but an association headed by the Dökkálfar Warlord. A merging of thoughts. Something spoken of by Devlin and Assassins Guilds. Secret Orders, sacred relics and betrayal. A familiar tale across many worlds.

And words spoken by Alice Shawcroft, the dead librarian. Houghton Conquest and paranormal societies. The odds of a Knights ruin lying amidst a town encompassed by so much history. Coincidence? An excuse wearing thin.

To his left lay a map. Upon it lay the Templar site. The ruin where Jeremiah Delalande rested. At least his bones in that world.

Not too distant sat the Black Marsh and it’s House on the bank. Home of Elisabeth Beechwood.

Paranormal history of Houghton Fengrave, as suggested by the Librarian, threw up three names. All ended with a surname and that led to the Carmichael’s.

Be you Joseph Carmichael, Knight Templar?

“Former and definitely not the latter, despite spectral entities personal opinions.”

Spectral entities infers you are among the living.

“I certainly hope so, but who are you?”

A figment of your imagination seeking answers.

“Good to know. That’s cleared things up then.”

Tell me of the Templars.

“Not much to say really. The old chapel behind Houghton cemetery was rumoured to be haunted so we investigated.”

Not the other one?

“Bit tricky that, we lost him.”

The old chapel… the Amanuensis turned back to the maps. Houghton Fengrave Cemetery and Crematorium clearly delineated. Beyond the southern perimeter lay the Templar site. Older parchments showed it existed long before the new development. Moving forward in time showed it atrophy, walls robbed out and the land reclaiming the surface. All except the chapel. That remained as a reminder this place held history.

Lost in time like so many ancient places. Forgotten, lessons not learned and so cycles repeat. Books tell the story and yet nobody reads.

Curious this site is also haunted. That makes two known places. Both around the Black Marsh that links two worlds.

Consider it part of a dream from which you will wake and remember nothing.

Why the Templars saw you.

“That is a question evading an answer here too.”

Then what was their purpose?

“Dying fighting some creature within the tunnels beneath the ruin. Except it wasn’t a ruin back then.”

A creature? Did they name it?

“No, their Master told us to flee before he joined the fray.”

And you saw him no more? Never went back?

“Once as it happens, in Wales.”

“No, it was totally separate.”

“You said twice more. What was the other time out of interest?”

Not mistaken, just too early in the time line. An early teaching. Using Rune magic to explore the books must not change the world of the living.

Few of those found themselves alone in a broken Keep with no answers.

Monks of War, a dead chapter in a world that outlived them. Common amongst worlds where power bases shift and old ways fail to adapt or… suffer catastrophic betrayal.

Or coincidences that can be merged together creating a false truth.

He exhaled letting his head fall for the first time. Next up was a place he did not want to go. The abomination of sorcery, Necromancy. Here was the one place he truly feared above all others.

The one that might explain the eternal winter and collapsed Keep.

The distant noise was now more defined. Steel on steel or wooden shield. Cries rich in adrenaline and bravado mingled with those in sufferance and defeat. Far away the fight continued for what seemed like an age.

The brothers remained locked opposite the door. Another ghostly experience spawned from a chance outing. Joseph was of a growing opinion that the supernatural dogged their every move. Where they went ghosts followed. Or maybe spectres were everywhere and they merely tuned in. It was becoming less fascinating by the minute.

Shouts were becoming louder and the clang of chain mail links and armour drew nearer as warriors descended into the cave. The Carmichael’s tried to blend into the limestone until realising this was not their time. They were the apparitions in this scene. Bearded men rich in the stench of battle, blood, smoke and sweat, filed past them and into the room beyond the door. Some wore white surcoats adorned with a large red cross.

They reminded Alan of another encounter beyond the crematorium in Houghton. What are Templars doing here?

At the rear was a man in a shroud like cloak. It may have been black or deep blue or green. The torchlight made it uncertain. Inside the hood his eyes glowed crimson.

Joseph drew air in and felt a despair settle that almost sank him to his knees. As the last of the Knights disappeared into the unseen room the sorcerer drew the door shut. Placing his hands upon the rock, words in an alien tongue reached the brothers. Hypnotised they watched white light flare around the door. A light so bright it left spots on their eyes afterwards. Both blinked and found themselves staring into the eyes under the hood.

You have a rare gift Brothers Carmichael. Continue and you will join the ranks of the living dead.
The sconces blew out and the dripping darkness reconvened on their world. Both exhaled simultaneously and illuminated the rock where the door had been. Joseph ran his hand over the limestone unable to find even a chink or ripple that might hint at what lay beyond.

The Monks of War, in a crude form, was posted on my blog some time ago, as was the vacation to Wales where the brothers Allan and Joseph Carmichael explored a castle ruin. Both links are below for anyone interested in learning more about them.

As for where the Amanuensis is going…I am more confused than ever!