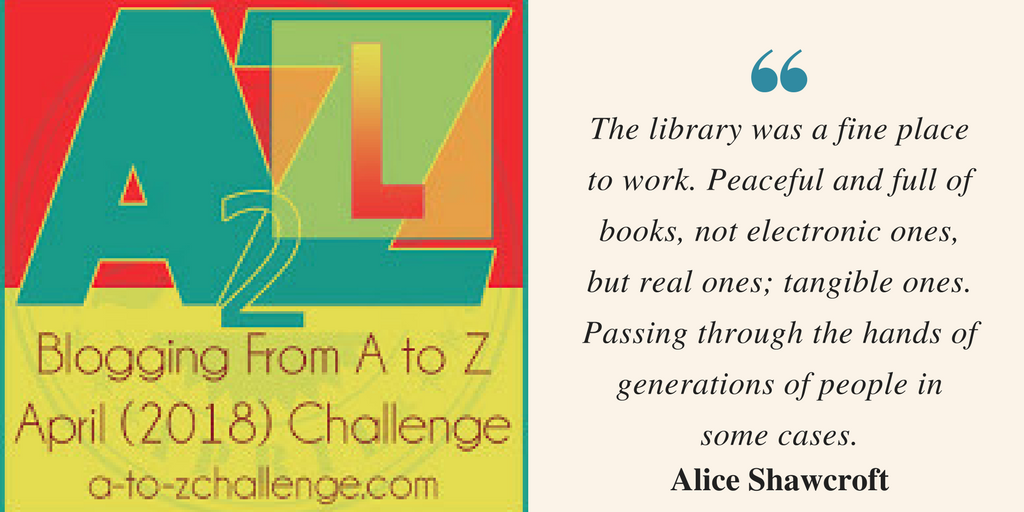 “Books hold the knowledge of the world. Never underestimate the power of reading. It is a gift. Show me an arch mage that can’t read and I will show you a fool.” Arch Mage Eldred Mortain, “Treatise on Enlightenment.”

In the town library, Alice Shawcroft was wheeling a trolley down an aisle towards author surnames beginning with “K” muttering to herself.

“Lazy no good wastrels. Take out a book and leave it on a table. Can’t be bothered to put it back. What is wrong with folk these days?”

She pushed her glasses back into position. Overdue tightening, as was an eye test, but she could still make the number plate of the car in front at traffic lights. Close up was still OK. Which was mighty fine for reading. A good thing that, considering her hobby was reading.

Alas putting away other people’s discarded books was not. In her mind there was a clear role for a library attendant and that was returned loans, sat on trolleys behind the official desk where transactions occurred, were legitimate. Those alighting on tables, chairs or trolleys scattered around the library were not.

These belonged to the lazy folk whose only ambition was to make Alice’s day filled to the brim with annoyance at trolling down aisles. In this case “K” searching for voids in the shelves requiring filling.

”What is wrong with folk these days?”

Extract from “Letters of The Amanuensis – The Librarian, Alice Shawcroft.”

Shelves spanned each wall. All encased in oak with intricate carvings of beasts and runes. The Amanuensis was becoming more certain each had deeper meaning than mere decoration.

It gnawed at him. So much inside this Keep was encrypted. deliberately so, in case of sacking. No persons outside the order could learn arcane secrets that could upset the balance of worlds.

Looking round he knew it had worked too. Overrun and nothing was missing. Not that he could be certain, but the room’s aura spoke in his dreams. Safe, it was safe.

What was safe though? This room, it’s books and secrets? Or something else, such as the Vault?

Yet here he was, an exception. Able to see through time and worlds, yet not knowing the Keep itself.

Travesty… a word becoming over familiar.

“Until the library burned down yes.”

“Exactly my thoughts, all those books lost. Some were irreplaceable.”

“Everything, not a single page left. It was awful.”

If she held knowledge of another Keep then it might fill in a missing link. He was a Scribe, The Amanuensis. She was a Librarian. A keeper and filer of books. He knew the knowledge to unlock all was here, just lacked the capacity to unlock it.

Rune Lore, it was all there and granted him much. What if…

Which world held your Library?

There was a Library there?

“Of course, knowledge is for everyone.”

Everyone? Even on matters relating to alchemy and arcane law?

“Of course. Our mythology section was surprisingly popular, especially with the local paranormal societies.”

“Oh yes, round here they are quite active. Very annoying when they never placed books back afterwards.”

Who are you Librarian?

Alice, you are not blind after all.

Alice Shawcroft, keeper of books in a hamlet living inside a corrupted black land. Disappointing. Hope turned to ruin. Alone in a Keep with locked doors and no way to undo them. Except in time, book by book until something is revealed.

He turned his gaze slowly about the room. Tome after tome, many layered in dust. One room of many. Of that he was now certain.

In front of him, at the desk, he glared at another parchment. Paranormal societies in that town. Crude, and yet overseen by something higher. Curious, not a municipal librarian either. The brothers three and the Monks of War.

On the outskirts of town Alice Shawcroft bent down to pick up “The Hound of the Baskervilles.” Not her pooch, but the Conan Doyle book that had somehow slipped off her coffee table.

Dogs she could not abide, all that hair getting everywhere, and muddy paw prints after walks in the rain. Chew marks on furniture as puppies. Definitely no hounds here, save for Sherlock Holmes in a crime that she had already read hundreds of times.

The other thing she couldn’t abide was ageing. Aches and pains that grew out of youth into middle age and beyond. Another reason to be annoyed at lack lustre types that left books all over in the town library. Folk seemed to think it was her sole job to clear up after them and re-house them. Trolling back and forth alphabetizing author surnames and finding even more stuck back randomly in the wrong place.

It was agues that made her pause on her knees mid rescue of the tome on her floor. A twinge in fact, a knee that spoke up and grumbled. However, that took back seat to a sixth sense saying someone’s watching you.

Her hackles rose and she felt a cold settle, giving her goose bumps. That someone’s just walked over your grave feeling. Disquiet where the ticking of her mantle clock grew louder decrying how silent her home was. Subconsciously she turned her head to look over her shoulder. Nothing to see, but the feeling remained as time stood still for a few moments. Dancing on the edge of a blade waiting to see which side things might fall on.

A moment later the temperature rose and the sensation evaporated. How queer, she thought picking up the book and settling back into her armchair. Thoughts of the library took back seat.

Just to be sure, Alice went first to the back door, to check it was locked, and then the front door to do likewise. A peek through the curtains revealed nothing amiss so she scuttled back to her seat.

Her coffee, however, was cold.

Alice Shawcroft belongs in a book working under the title The Bequest. Still a WIP with five chapters or so to go. A project to be undertaken next after the A to Z is finished or comes unstuck.

I say unstuck because the Amanuensis is taking a stronger hold and requires fleshing out more. He is taking more time with each post now as I explore the potential back story. Gone is the narrator sat at a desk illuminated by two candles that never burn down.

Links with the fantasy story outside of Houghton Fengrave are stronger. This is the world of wights, The Black, wizards and magic. Houghton is in our world and these things are now mere myth and legend. We shall see how it bends in the next three posts.