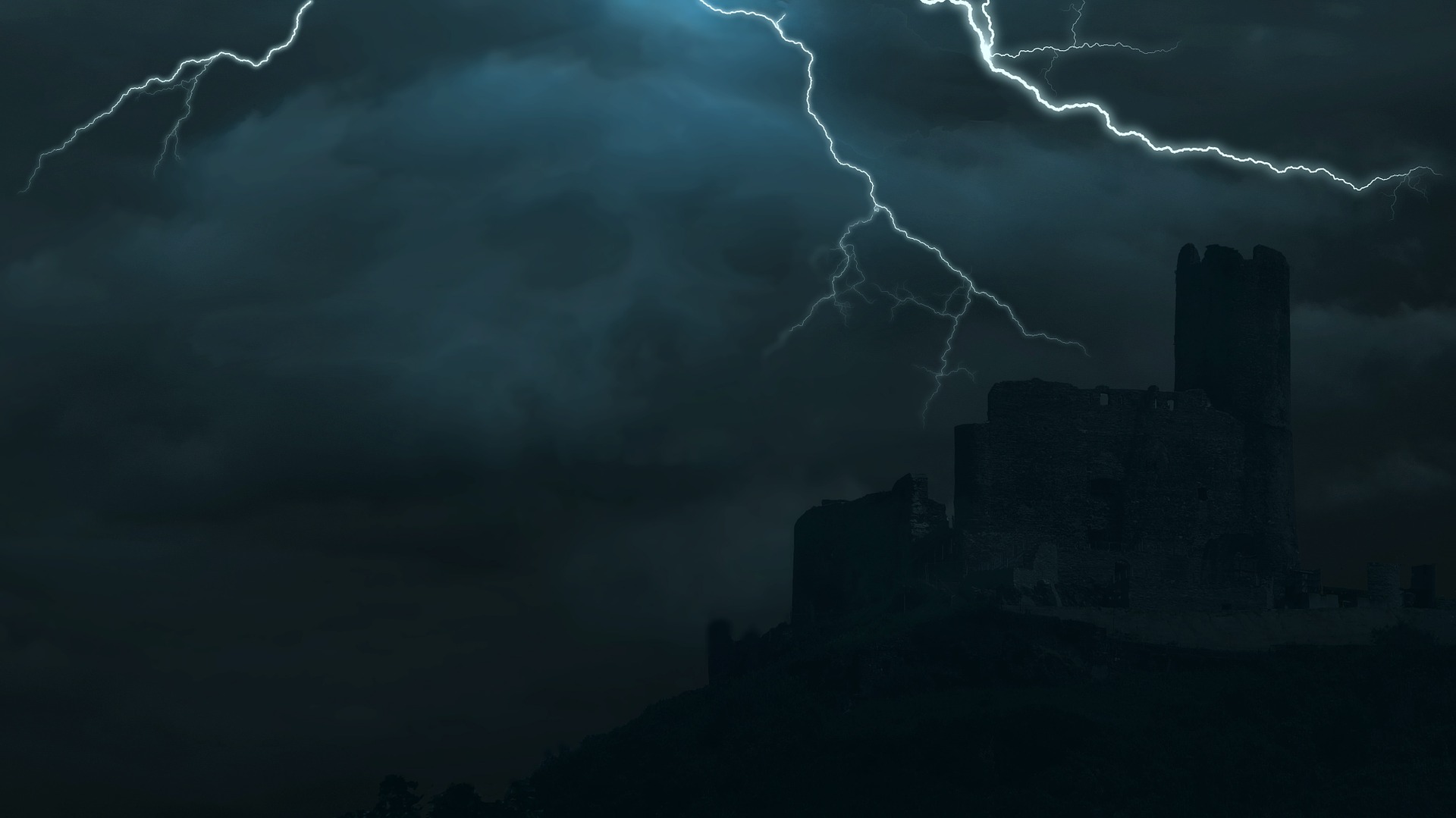 Having escaped the crypt where the Templars fell, the Brothers Carmichael turn to a vacation in Wales. Visiting a castle ruins to relax and take in some history. What can go wrong?

This is the seventh part in a short story series I’ve been running on my blog. I offer apologies for not posting over the last two weeks, but one stepped away for a family holiday and mental recharge.

Last time the paranormal brothers found themselves in a ruined chapel in Compton; an arm of the pentagram disclosed in a previous part of this tale. There they found themselves witness to a cell of Knights Templar ending their days combating something in the distant past that now lies burried in the Marsh.

To escape the growing tension they have taken a holiday in Wales. A time out against the deepening issues back home. After all, it’s not every day the ghost of a Templar Master issues a direct command to flee to living observers.

The links are below, in order, and may contribute to a better plot understanding…or not, as the case may be!

The Room That Swallows People

The Monks of War

If you want to see more then please say so in the comments and please feel free to share any of my post. It will be hugely appreciated!

The world outside was long forgotten amidst the sounds of dripping water in the distance. Underfoot, the stone was moist and keen to draw uncertain footfalls into treachery. Joseph Carmichael’s torch flashed across the limestone, briefly illuminating a sphere of rock before darkness fell in behind. The air was moist and cold; inhabited by memories of the distant past. Part of the cave felt uncertain whether it had even let go of it at all.

Alan recalled something about the Dead Men of Dunharrow and some academic treatise on the sleeping warriors of Castell Carreg Cennen, doomed to eternal sleep until the world above needed a king to restore order and banish evil. Supposedly, it gave inspiration to Tolkien.

Dead or sleeping though? For Alan it gave the subterranean tunnel an edge, and brought time into being as he pondered the ruins above. A colossus of a fortress dating back centuries, impregnable and defiant; even in the death throws dealt by pick and axe of Yorkists in 1462 as they routed Lancastrians and lay waste to rock and stone. He could feel the castle’s heart beating in the bowels of the earth. Slow, but still there…waiting…for what?

Dead Men of Dunharrow, he thought.

He stumbled into the back of his brother who had stopped without warning. “Al, is it me, or is that a door made of stone hidden in the wall?”

Two torches convened on the alleged portal both had just passed. Joseph’s wandering beam had clipped a fissure inadvertently and chanced to follow it in a neat rectangle rising from the floor.

“Certainly if it were wood, then a door it would surely be.”

Alan was considering it an anomaly of nature whilst his brain attempted to subdue thoughts of hidden bed chambers, filled with the deceased.

Jo was less concerned with apocalyptic warrior kings and more interested in the potential for an unexplored section of cave. He ran his fingers around the gap defining the doorway. After all, tales of subterranean sleepers festooned the European landscapes, so probability rested more on people’s imaginations rather than fact. Standing up and staring at his circle of light, that thought gave him a mental jab. All our investigations rest on imagination and myth – what am I jabbering about?

“If it is a door then it appears well and truly closed does it not?”

“This is true Al, but consider the volumes of tourists visiting this very cave over the years, and the vast centuries of use before then. Is it not curious that nobody has witnessed this curious rock formation and considered it a tad unorthodox before now?”

Alan thought for a few moments listening to drops of water echoing in the gloom. The air was still and the shadows curled around their torch beams like some incorporeal duvet. In the distance there were sounds. Indistinct and far away but maybe shouts and a clash of steel?

Unconsciously, they both moved against the wall directly opposite their newly found stone anomaly. Both torches clicked off. In the darkness it seemed like their hearts were echoing and each breath sang out saying ‘Here we are, come slay us.’

From the direction of the castle, ghost light was rippling towards them sconce to sconce and chasing back unwilling shadows. Alan nudged his brother and nodded toward the door. It was slightly ajar with light spilling out, but not quite revealing what lay inside. Smoke filled the cave.

This is the past, Alan thought.

The distant noise was now more defined. Steel on steel, or wooden shield. Cries, rich in adrenaline and bravado, mingled with those in sufferance and defeat. Far away the fight continued for what seemed like an age. The brothers remained locked opposite the door. Another ghostly experience, spawned from a chance outing. Joseph was of a growing opinion that the supernatural dogged their every move. Where they went, ghosts followed. Or, maybe, spectres were everywhere and they merely tuned in. It was becoming less fascinating by the minute.

The shouts were growing louder, as the clang of chain mail links and armour drew nearer. Warriors descended into the cave. The Carmichael’s tried to blend into the limestone, until realising this was not their time. They were the apparitions in this scene. Bearded men rich in the stench of battle, blood, smoke and sweat, filed past them and into the room beyond the door. Some wore white surcoats adorned with a large red cross. They reminded Alan of another encounter beyond the crematorium in Compton. What are Templars doing here?

At the rear was a man in a shroud like cloak; it may have been black or deep blue or green. The torch light made it uncertain. Inside the hood his eyes glowed crimson. Joseph drew air in and felt a despair settle that almost sank him to his knees. As the last of the Knights disappeared into the unseen room, the sorcerer drew the door shut. Placing his hands upon the rock words in an alien tongue reached the brothers. Hypnotised they watched white light flare around the door. A light so bright it left spots on the eyes afterwards. Both blinked and found themselves staring into the eyes under the hood.

You have a rare gift Brothers Carmichael. Continue and you will join the ranks of the living dead.

The sconces blew out, and the dripping darkness reconvened on their world. Both exhaled simultaneously and illuminated the rock where the door had been. Joseph ran his hand over the limestone unable to find even a chink or ripple that might hint at what lay beyond.

“Are you referring to the door that is not a door, Templars in Wales, or the threat issued by a ghostly Warlock that we may soon be deceased and yet not so?”

Joseph turned and met his brother face to face; both lit up by the others torchlight.

“How about; now there’s a few things?”

“Better. Perhaps this might be a good point to retire.”

They began working back up the incline. No sconces were mounted on the walls now and smoke was replaced by the aura of time enriched in history.

Joseph spoke quietly. “Did you mean retire from this holiday in Wales, or, retire from our hobby that is no longer a hobby?”

“I rather feel longevity of life is not conducive to experiencing ghosts that know we are there. Have we met this mage before?”

Alan was similarly hushed, but rather more dour in voice. “Do you not find it strange that twice now Templar based apparitions have called us Brothers Carmichael?”

“Indeed, this has not escaped my musings. However, it is the red eyed magician that concerns me now. I have the most terrible feeling we will have seen him in the future.”

Joseph exited the tunnel in the south east corner of the inner ward of a castle in ruin. The steps up were steep but not so treacherous as the dampness lying in wait to take the footing of an unwary explorer within the cave.

“While your statement is curious…I know exactly what you mean.”

If you made it here, then thank you for taking the time to read. Like I said before, these add back story to other books; and yes, I know they need tweaking, but if they become a manuscript then that is where the transformation from short story anthology will turn into the real deal.

Shares or comments are welcome and if you want more then please say so lest I distract…something I am very good at doing !!