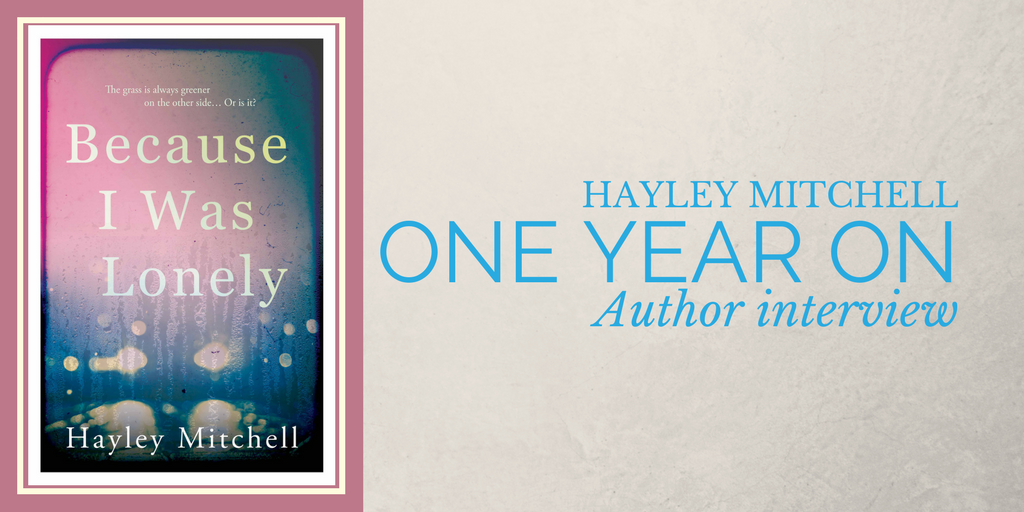 The road into publishing is rich, varied and often full of trepidation, but what happens in the aftermath? Hayley Mitchell let’s us inside her journey.

Last year I had the pleasure of running an author spotlight on Hayley Mitchell to promote her debut novel “Because I Was Lonely.” A gritty tale of two fracturing couples driven by depression and flirting with better lives through social media.

Hayley was accepted by RedDoor Publishing who turned the dream into reality. Launched on 02 March 2017 BIWL soon caught the attention of bookshops and received excellent feedback.

But what happened next? I caught up with Hayley and suggested we do a follow up. I was very interested in finding out if the publishing euphoria continued and to see whether her dream was to publish just one book or use it as the spark to ignite a full author career.

Here’s what she has to say.

I never expected to achieve my publishing dream.

For a long time self-doubt and ideas that failed at 20,000 words stopped me. People like me don’t write books. Nevertheless I continued to battle on, fighting the doubts until one day that first draft was complete.

On 02 March 2017 my debut novel “Because I Was Lonely” was published and, to be honest, I’m still in shock.

Since then it’s been a year of firsts, but the one that stands out most is the day a white padded envelope dropped through the letterbox. In it was my book, my words, my years of work all wrapped up inside the most beautiful cover I have ever seen.

My book! The book I wrote, the book I cried over with frustration when words just wouldn’t flow, a book that was seven long years in conception.

Firsts followed firsts, it was all new and exciting. Book signings, radio interviews, a launch party, talking to local book groups and nobody telling me to shush when I spoke in the library. People who read my book wanted to talk about it.

It was the strangest feeling, listening as they discussed the characters as if they were actual people. They had been real to me of course, they had been for a long time. I lived and breathed them, they woke me up and 3 a.m. and wouldn’t let me sleep until I crawled out of bed to write down what they said.

This year went way beyond my expectations. Originally, I just wanted a book, on a book shelf, maybe even in a book shop. I wanted something tangible that I could touch and say “I wrote that!”

When “Because I was Lonely” was selected for the WH-Smith Fresh Talent promotion in the spring of 2017 I didn’t know how to react. I was delighted, but it wasn’t until friends texted me or put photographs on social media that it sank in. People other than friends or family were reading my book.

Because I Was Lonely is now available as an e-book, an audio book and a paperback. The good reviews, thankfully, greatly outweigh the bad. I struggle with self promotion, but I have been lucky my publishers RedDoor are both professional and approachable and have guided me along the way.

I have also had so much support from bloggers and, whilst I have been kicking the toe of my boot into the dust with my eyes cast down asking “Why would anyone would want to talk about my book?” they have. Moreover they have re-tweeted, shared interviews and reviews all across social media and my “Thank you’s” somehow feel inadequate.

A year on I’m still writing. For a time I was caught up in the need to get that second book out there. I have two and a half first drafts, but no second book, not yet. I got myself into a bit of a spin, write, write, write. Alas quantity isn’t quality, not in my case. I’ve found writing the second book difficult and I was in too much of a rush.

Recently I’ve taken a breath, paused and slowed down. What I need to do now is turn those first drafts and ideas into another book, I need to round out my characters and that requires time, patience and a great deal of editing.

I’ll get on with that now and turn those words into characters that people want to discuss.

I feel incredibly lucky to be able to do this, to write, to have my dreams fulfilled.

It has been the most amazing journey and I’m not ready for it to end just yet.”

It seems the journey is far from over, but avid readers will have to wait a while longer until the next books are ready to hit the shelves. Hopefully that won’t be too long.

You can find Hayley and her book purchase link below;

Because I was Lonely; Amazon