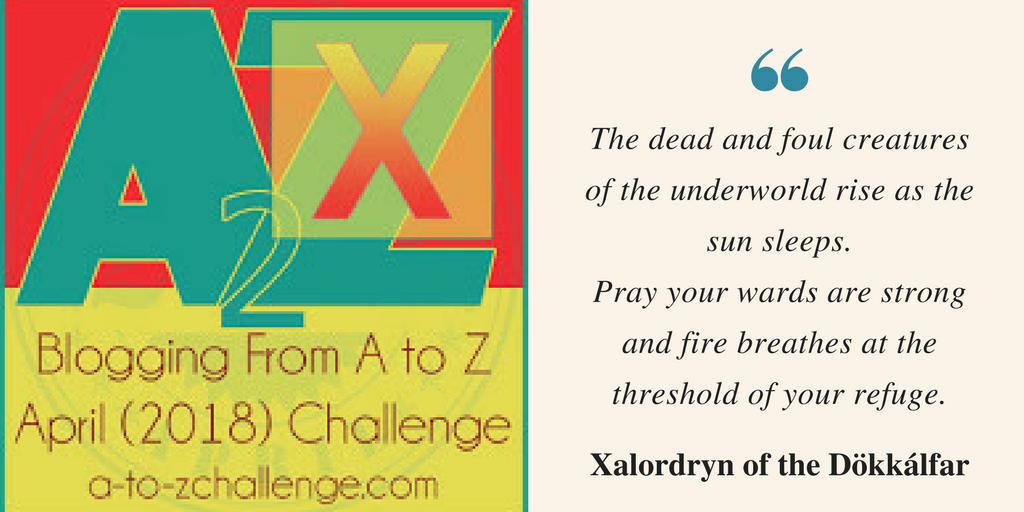 “The Council erred. We betrayed one species and should have waged war on man. Fresh from victory and struck them from the world too.” Xalordryn Landirthir, Testimony to the Privy Dökkálfar War Council.

The wizard had seen the end of days for his retinue several days earlier. It had come to him while seated on a log studying the flames of the campfire in the midst of night. In them he saw the Elite fall, the fate of the warriors did not concern him.

It had been agreed at the Council of Kings that right of passage would be bought in living flesh. The mage could escape whilst blood flowed and, if the Gods willed it, this would be close to the border of forest and Badlands. Sorcery would not be needed and he could pass out of the Wraith Wood unseen.

Thereafter was beyond the scope of Men and others would need to take up the burden. The shadows were falling and this world was all but lost.

By the time life fell from Devlin’s eyes the mage was long gone. The Elite had known the path ahead lead to ambush half a league before and the wizard had been dutifully cast from the company unseen by either warriors or shadow trackers. Careful wood craft had slowly turned them east and parallel to the northern edge of the forest thereby allowing the mage to flee directly north. Hoping to clear the woods before the echoes of the last clash of blades died and the sounds of battle drew silent.

It had almost worked. As he neared the line between tree and grass, four shadows grew from the decayed undergrowth; in formation, sword hilts clutched in front of midriff with blades pointing straight up.

Shards of cloak trembled in the breeze drawn off the plains. So near and yet so far. Confrontation was unavoidable this time. Drawing himself up his mind filled with fire. The wraiths issued hollow screeches and raised their swords as the wizard transferred the conflagration inside into two fireballs that fled from the fingertips of each hand striking the front two square on.

Unlike the Elite’s steel the fires caught, engulfing the lead revenants. Such was the heat issued by the mage that incineration was brief and complete. Two blades fell into the earth and turned to dust.

The remaining undead separated but failed to consider assault from the rear. Arrows tipped with flame hit them from behind. Both wraiths dropped their swords and sped off into the deeper forest before the fire consumed them.

Cautious, the wizard edged forwards. He knew the unseen archers had marked him out and suspected the Dökkálfar. It was their border. At least it was below the wastelands in subterranean caverns and citadels hiding from the sun.

From a leather pouch beneath his cloak the wizard drew out a pendant. Black polished obsidian within a band of pure silver and inset with an emerald seamlessly conjoined, a Dragons Eye.

It felt ice-cold in his palm. Fingers closed around the stone and he looped the silver chain around his wrist. He could feel skin freezing to the surface. Always the same pain of frostbite until his grip weakened whereupon the warm glow of life returned leaving his flesh unscathed.

Nothing stirred ahead, but this, he knew, meant they were awaiting him just beyond the tree line. Dark shadows of the under earth living in eternal shame at their role in the desolation of the surface world above.

Extract from “Letters of The Amanuensis – Elven Lore”

“The Dökkálfar live in dark places beneath the plains or, like dwarves, in mountain tunnels and citadels. Rarely do they venture above ground unless the storm of war is gathering. They are secretive and long-lived. Few know they exist and many ascribe them to myth and fantasy. This is a mistake.” Ynshael Faeroris, Elven High Caucus.

A change of tack. Something in the pages had drawn attention. Another Dragon Stone existed, this one emerald. What is it this Wizard seeks? Oracle if he remembered correctly. The dream girl lost under a spell cast by the abomination himself.

A Sorcerer that rode the Barrow Woods, survived the wights and lived beyond the realm of Dökkálfar to walk on and… what?

If The Black lived on with it’s stone intact, then were there more? Was The Emerald still there? Were the others?

Xalordryn Landirthir, Warlord turned Councillor it seemed. Seeking atonement for the death of a species in a forgotten war spent on a world few believed existed.

Absolution is more than mere apology and kind words.

I am no conjurer Elf.

“You come from The Keep. None leave there as mere mortals. Word spreads fast.”

The Keep is spent.

That is an answer I am still searching for.

“Don’t think we had anything to do with it. Once fooled by a defiler that lied dies not make us concubines of his purpose.”

You know more than first appears. The Wizard…

“One of yours. His passage was free.”

One of ours? Are you certain?

“He bore the sigil.”

Was there a name?

The Amanuensis stood gazing across the snow field.

One of ours. A Mage travelling incognito. Risking all traversing the barrier between what was and what is. He wields the Emerald Stone and seeks an Oracle. Shed the lives of part of the Kings Ward and The Elite to escape the wights.

Not the actions of those from here.

He turned and leaned back on the stonework. From here in the past maybe. Now?

He stared through the window and into the Library. Now, the past is dead. Everything that was crumbled in ruin. Orders extinct or cast across worlds trying to make good their lots. Fragmented and desperate, leaving him locked inside the highest most point of the Tower. Alone and bereft of memory.

Xalordryn, former warlord, describes a defiler, a trickster. What were the odds on this being a Cloaked Man? A Physician? A Necromancer?

Was it coincidence his own reach travelled to places rich in tragedy? Were these events simultaneous across time and worlds? Triggering at specific points culminating in the death of a child in an inert world ruled by science and physics.

And now the trail was leading to Elves and an unknown Wizard.

“I never saw him, nobody did. He came at night in dreams spreading death, speaking in riddles and blaming all races, but ours.”

You had a choice then. Comply or die.

“It was never a choice. The Witch that followed would have killed everyone. Child, baby, male, female, cripple, aged. It mattered not. Us or them.”

I know of this demon.

“You should, the Wizard said he was one of yours too. An abomination was his exact word.”

Then all worlds are at risk.

“Given another chance. We will fight to regain our honour.”

That is something we all must do now.

Travesty across all. Their nemesis is the same as in many worlds. The Necromancer. Riddles, lies and beguiling deceit. Follow or face extinction.

What would anyone do? Protect their loved ones or see all perish. Genocide of another, or of your own? An impossible choice and one no creature should be faced with.

Why Dragon kind though? What purpose does that serve?

Perhaps a feint. To turn others against each other. Create wars by seeding the reason elsewhere. Mass slaughter to distract another infiltration.

The child who died is key. Why such a small thing when slaughter abounds everywhere? Something doesn’t feel right.

Nothing feels right. Dark Elves considering alliance to a common cause, a Blacksmith interred with The Blacks Stone, a Mage seeking the Emerald and an Oracle. Transgressions through time by the Paradox Man, a Witch Queen turned, Assassins and War Monks abroad.

And I am no nearer escape or The Vault.

We are losing… badly.

His staff kicked up dust and ash wherever it fell on the approach to the falls. Dusk was upon the shadow of the mountain. Beyond the sun began to ebb leaving the clouds to brood in the onset of night. There were no stars to see here, no howl of living beast or rustle of leaf in the wind. No trout topping for an afternoon hatch or hawk hovering looking for voles or mice.

The wind blew though. Strong, cold and unforgiving. With it came sounds that belonged in the forest wall where revenants held sway that did not countenance the living to pass. In the distance something crashed in the water. Behind he felt things watching and awakening as the day became night.

The dead and foul creatures of the underworld rise as the sun sleeps. He remembered the words spoken by Xalordryn as his eyes locked onto the dragon stone. Pray your wards are strong and fire breathes at the threshold of your refuge.

As light began to fade it seemed the trees leaned ever closer, dipping their dead branches attempting to ensnare those that passed below. His breath began to fog as the cold crept from the lake and bled into his bones.

Moving swiftly he reached the foot of the rock face and turned toward the base of the watery cascade. Hewn in the stone was a weathered set of steps almost invisible unless eyes were looking. Lichen encrusted and spattered with moisture and spray from the descending torrent.

Easy to miss and easier to slip and tumble downwards to be sucked into the deeps at the base of the cliff. For a moment he paused wondering how many unfortunates lay hidden in the depths, how much steel and bone rested in the mud watched over by whatever vile beasts now swam beneath the foam.

Above a rock dislodged and he heard it tumbling downwards, vying against the tumult of water. Close but not destined to end his days this time. A timely reminder that reflecting on the past was not a luxury he could afford right now.

Descending, the gloom thickened as the stairs wound back and beyond the curtain of water into a cavernous chamber that looked back at him like some dark empty eye socket.

We are now entering the final two letters, and are they headache material. Y will draw in my Elf Sorceress mentioned at the start. Z I have no clue at this moment in time.

Surely one can’t stumble on the final letter!