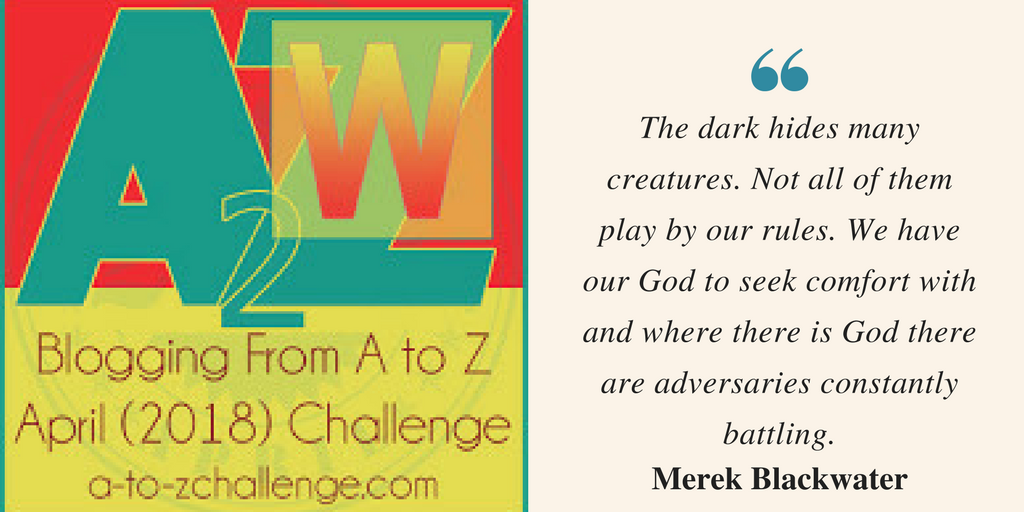 “Witchcraft or worse. Whatever hit the boy here sent him clean over the edge and down the drop.”
“Worse?” said the man with the loud heart. “What could be worse?”

On the next waking he sensed his grip on the past failing fast. All save one that came to him in a dream deep inside the unconscious abyss. The girl he saw was bewitched and vacant. Her dress ripped down to the waist exposing skin and breast red with blood that seeped from two wounds in her neck. Runes were etched on each wall and upon the floor was drawn a massive pentagram whose points were connected by a circle of white. The girl was chained to a stake in the centre and the room suffused in incense and smoke spewing from torches and candles. Dark hooded figures moved round the outside of the circle chanting in some language he knew not. The girl’s head raised upwards and he watched her mouth call out his name.

Wayland’s mind broke out and back into the broken confines of his dying body. Tara Spinlow. His mind screamed outwards in grief and remembrance. She had agreed to wedlock moments before he fell. But even in that she had seen the outcome in a dream the night before.

Wayland made an oath: if I survive this ordeal then I swear on my forefathers I will find you Tara and take revenge on those that did this.

The Black clearly agreed and let him lose the world some more. The darkness of subconscious cleared placing him in another dreamscape to walk with visions of other places.

The dragon was there again, ever watchful and curled up with enormous horned tail wrapped up against its jet black body. It’s maw widened revealing long canine teeth near the front almost the length of Wayland’s arm, thickset at the base rising to points that would rip armour to shreds. Four incisors top and bottom rested between ready to sever bone and flesh alike. In between the jaws snaked a forked tongue, byzantium in colour and continuously tasting the air for scents that might need scourging of life. Behind these, and pointing slightly backwards, were rows of pointed teeth.

Vast eyes matching the tongue surveyed the ground below it’s perch. A half-moon shaped plateau outside a cavernous opening half way up a sheer cliff face nestled on the edge of a mountain that rose into the clouds.

Below rested the petrified burnt out skeletons of a village with caved in roofs and lifeless orchards. Fire had bathed this place and sterilised it all the way to the baked mud at its roots. In the far horizon he could see the edge of a long wall of trees over which the air shimmered in a haze of heat. Between that and the mountain the land was desolate and pitted. Relics of battle lay scattered as bones and fleshless bleached skeletons lay rising in anguish from the scarred mud.

Extract from “Letters of The Amanuensis – Dragon Stone Lore.”

The Vault trail had run dry. Things turned in circles. He’d tried leaving by the oak door twice more. Both time it led down a corridor that returned him back into the library. Nothing in Rune Lore explained the conjuration or, more importantly, how to break it.

The Assassin talked in riddles. It was obvious he knew what lay inside and why the two who authored access thus far had been unreachable. Exploring tomes and parchments took him into other places. Characters from different worlds that knew even less.

Learning was creating questions with few answers. Worlds colliding elsewhere, a Black Marsh surrounded by relics of bygone ages. Ghosts and Templars. Assassins and Readers of Cards. Magicians and a High Priestess. Younglings struck by love and embroiled in events that would change them forever. Brothers in arms dwindling with each encounter.

Around them, in another place, sat a Black Dragon guarding a Stone. A Blacksmith torn from his lover, a mage wandering the same land in a different time across a genocide field seeking an Oracle.

Then there sat the Paradox Man, split through time. Twins separated by death, Witch Queens and The Cloaked Man, The Physician… The Necromancer. Old as time some said.

A far cry from halcyon days when he entered the Academy to begin training in Runes and chronomancy to ascend, as the Amanuensis, into the very Library he could no longer escape.

Something was missing. A gap in his knowledge or memory. Or both.

“You can hear me?

“And you are not the dragon?”

The Black, no. That beast has cast an eye elsewhere for now.

That is beyond my knowledge at present.

“And if you do, then might there be hope for salvation?”

“I am undone, bewitched or cursed. I hear the world, smell it’s blood, travel in a place that isn’t my world. The Dragon taunts me and all around is darkness and black. I see no night or day, breathe no air, cannot move.”

I fear you may no longer be what you once were.

That is not for me to say with certainty. Many worlds are wrong, many creatures are stirring. Chaos is returning.

“Is there nothing to turn it aside?”

Not that I have found.

“Are you looking in the right places?”

Right places and wrong places. The Assassin inferred the answers were there. Yet I have been unable to locate them. I fear time is short now.

The irony was not unnoticed. The Library of Time, an ability to hunt through it, speak with those in other worlds, with the dead and those alive in the enormity of ages. Seek knowledge from anywhere and still unable to exit this prison. One that I first though was of ice until the very door to escape this room curves back on itself preventing exploration out of these chambers. The Vault might as well exist in the furthest dimension of space and time for all the good it is as the Keeps Undercroft.

Worlds were turning on pivots. Genocide in one, wanderers in others seeking Dragon Stones, death and abductions, fires and Assassins. Events isolated in each place, but connected throughout time to the rest. Even the Keep sacking. The one place that could have broken the chaos in ruins with an imbecile left to uncover the truth.

Why can’t I remember?

Before what? Why did I say that?

Smith… I see you.

Wayland started. There was evil in his mind. Cold words creeping across his unconscious conscious and rich in melancholia. Glancing round he was drawn up to the plateau where The Black was reared up on hind quarters unfurling huge six ribbed wings ending in curled talons. Webs of weathered skin spread out over them and leaving the horned tips protruding at the rear. It’s neck stood proud and layered with scutes whose edges shimmered in a purple haze where the sun reflected. It was the eyes that captured Wayland, for these were settled right upon his.

You are a figment of my mind Dragon… begone.

The Black dropped off the plateau and the wings took air lifting him upwards to circle high above the ant of a man down below.

This was a new voice, a girl. Not any girl though Wayland knew this one. In this unconscious realm his memory functioned perfectly.

The Dragon’s spirals dwindled as he tipped his wings and began to descend.

”Where are you Tara?”

”No time, get out before the beast consumes you.”

Wayland was aware a dark shadow now fell over the ground following The Black was closing.

He could feel panic stirring and his heart throbbing in his ears. Around him the world was a desert of ash. The forest was leagues away and the cliff housed the lair.

Are you certain of that? The dragon was taunting.

Tara was screaming at him. In desperation he was backing away from the cliff; not that it would help but standing still seemed nearly as pointless. The Black had him.

You are already dead in that world Boy.

Looking up he could see the beasts hind legs draw up and flex five byzantine talons on each foot ready to crush him. Fear paralysed his ability to move; his eyes locked onto the size of the claws. Hope fled.

“Wayland Ferrars wake up right now or you will never see me again.”

Tara roused his subconscious mind. She was pleading now and courage coursed through his veins. The Black crushed down and this world fell into shadow.

It struck me in the very last words of the Amanuensis that there are, in fact, three days left. X, Y and Z.

X I have in a character that isn’t fully fleshed out yet and part of a wizards journey. An extension of Devin and The Elite who were massacred by wights in a previous. The other two are possibly going to present some problems!