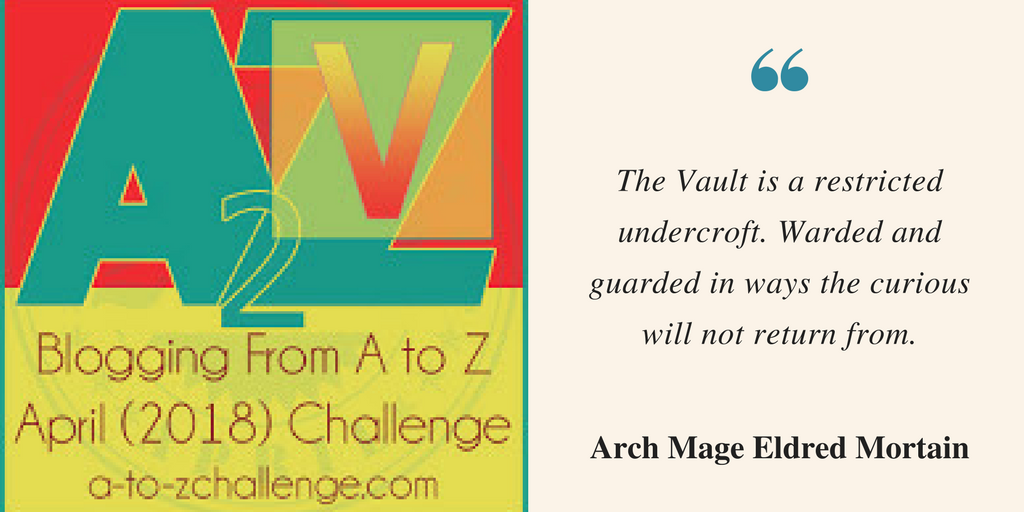 “Knowledge is layered and, while freely accessible, is drawn from many arts. Some secrets are not suited to particular artisans. Each Order has a dedicated athenaeum. Never be tempted to uncover The Vault.” Arch Mage Eldred Mortain.

Those habits were back now too. Triple checking doors and windows and making sure appliances were off. Same with taps, no drip, drip dripping for her. Pots and pans washed and put away and a final check to make sure they were off. The bedroom had a night-light now too. Plugged in just by the door. Took the edge off the darkness.

Didn’t stop the feeling of being watched though.

The icing in the cake came in the post that morning in the shape of an envelope with her name scrawled in handwritten ink, sloping to the right. She considered it a child’s writing until reading the content.

Please accept my apologies for not speaking to you in person, but events have overtaken me and by the time you receive this I will, in all probability, be somewhat incapacitated.

Therefore I have decided this is the next best thing, if a little impersonal for what I am about to say.

You are indeed being watched. Compton is going to have a weekend of bereavements. Sadly, I have seen your demise. It will be Friday 13th in the library.

That was it. No details, no here’s how to avoid it. Just sweet and simple, pop your clogs tomorrow.

Clearly it was a prank, and linked to the book shuffling in the library. After all, she didn’t even know a Joe Stringer. He wasn’t even on the book borrowers database. A good case of what the hell is wrong with folk?

Still, he knew she was being watched though. That sent the hackles rising. How did he know that? Unless, she thought on that, he was the one watching. What would Holmes do? Probably toss it in the fire saying crackpot.

Still, it fuelled the paranoia.

After all, she was being watched yes?

Extract from “Letters of The Amanuensis – The Vault.”

The Library of Time held little in relation to the Vault. Granted there was a vague schematic showing each layer of the Keep save the one he was interested in. According to the plans only cellars and storage in an ordinary looking basement. No mention of undercrofts or arcane athenaeum secreted beneath the foundations. He cast his mind back.

“The Vault is out-of-bounds to all but the Arch Mage and Master of Assassins. In the absence of either then nobody else, irrespective of rank or status will be permitted inside. This is not a rule, but a reality based on access. Failure to comply will activate certain defences that will compromise the curious and erase them from the archive of Time.

Consider this a warning. The Institute has no desire to lose yet more students.”

And yet each year it did. One thing that was constant and certain is youth. Give them a directive and some will always try to prove you wrong. Except none ever came back from the Vault and within three sunrises nobody could remember the names either.

He drummed fingers on the oak table. One or other of Arch Mage and Master Assassin could enable entry. The Arch Mage was incommunicado. The Master Assassin on the other hand, might just be the aged creature that once found him way back in time. The very one he’d been talking to already.

He needed a Seer.

A seeker of knowledge.

“You mean you need a fortune-teller.”

Nothing is it seems.

“What is it you want to know?”

Why the Vault is restricted to only two.

“That is past my friend. I only see death in the future.”

Can you see mine?

“Yours… is as fearful as mine. Death follows your spirit Amanuensis.”

“Mine is chased by a demon. Always I can hear vile laughter and lies. Each night taunted by a madman. Rewards for release. And yet his aura is vile, tainted and possessed by insanity.”

And this relates to mine how?

“Are you not chasing demons of your own?”

“The old one speaks to you, accuses you and sets your mind against itself.”

“The Dark Mage. The one who breaks time and decimates worlds.”

“One of his names Amanuensis. Defiler, Traitor, Beguiler. There are many in thousands of worlds lores and myths.”

And it is this abomination that trails me?

Of my world. The Amanuensis stared once more into the flames that never died. Each enquiry gave differing view points. Smeared the truth with dabs of uncertainty. None had answered without flirting about the edges. Now on top of all it seemed this Seer, this Stringer, considered him chased by the darkness.

Chased or coming to greet an old friend? That was the unanswered question.

Why am I here?

Arguably the question most poised in all of time. Except here it was about purpose. Escape had proved elusive. The Assassin hinted answers lay within his grasp. It all seemed very cyclic. Not just in the lines of reasoning, but in seeing this turn of events in a dream state. Deja vu, waking in a conscious that had done this before.

Was that the nature of the prison? Was he really here or just riding an illusion. It felt real, but so do dreams and unconscious realities. Even in those one could move. This was a prison of ice in a ruined Keep. The answers lay at the furthest part from where he was. Through doors that sent him back here and floors that might no longer be passable into a Vault that might be his nemesis.

Was he any better than a madmen in a box? The child bricked up? A ghost from a time long past…

This almost takes us back to “D” and Dragon Stone.

Joe Stringer was instrumental in a manuscript for using the power of foresight on two protagonists. A haunted man as inferred above.

All things relating to the Library, Amanuensis and ice prison are entirely new. As are the Arch Mage and Jeremiah Delalande. The Keep and Vault too for that matter. Forgive me if those parts are raw and untested. As I’ve inferred in comments and this post conclusion before, the seeds of a new story have taken shape.