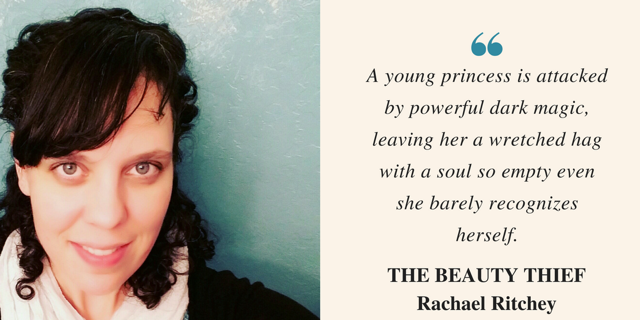 Author of YA fiction The Chronicles of the Twelve Realms, Rachael Ritchey’s first book The Beauty Thief is a wonderful introduction to her series.

As with many authors that blog, I encountered Rachael first a few years back while she was running the Blog Battle. A flash fiction competition based on a keyword that had to be included within the story. Like many other writers I have got to know them through their writing and engaging on their blogs.

Over time that turns into friendships, and now I’m in a position to add something back to the work and effort that goes into writing a book. Never underestimate how difficult that can be. It requires dogged determination, an active imagination and frequent internal questioning about validity and worthiness of the story unfolding.

In other words if you find out someone you know has written a book, do not just say “Oh, that’s cool.” Be amazed, awed and make really enthusiastic accolades in recognition that 80,000 words or so is no mean feat.

I feel exactly that about everyone I get to feature here. It’s a heck of an achievement. One reason the least other people can do is take a few moments to review any author’s book they have enjoyed. Feedback is everything as I mention in a previous post.

Why Good Bad Feedback is Better than Bad Good Feedback

Now, let us explore the world of The Beauty Thief and it’s author Rachael Ritchey.

Magic is long dead in the Twelve Realms. At least this is what most believed until an innocent young woman becomes the obsession of a man who defies time by stealing the only thing that sustains his life: true beauty. Princess Caityn is more than a pretty face. Her beauty runs soul deep, and because of this, her life is priceless to the thief. On the eve of her wedding to the high prince, Caityn is attacked. The thief’s powerful dark magic leaves her a wretched hag with an unrecognizable, shriveled soul.

Stories of old. A quest. Willing sacrifice. These are all that can save her, but doubt is a powerful weapon, and the thief knows it well. He will stop at nothing to keep the prince from undoing the curse.

Rachael Ritchey is a writer from Eastern Washington. She grew up enjoying movies and books full of adventure, fantasy, romance, and mystery. Her love of writing started in middle school, but it wasn’t until years later that she fully embraced her passion for imagination.

She’s written several books in the Chronicles of the Twelve Realms magical realism series with a few more to come. Rachael and an illustrator friend recently teamed up to create a beautiful story book adaptation of her first book, “The Beauty Thief,” which is available in print. When Rachael isn’t writing or thinking about writing, she’s hanging out with her family or working on design projects for other indie authors. And as always, she’d love to hear from you!

I could extol the virtues of The Beauty Thief, but would you believe me? As I said above Rachael I’ve known a while now and do friends make good reviewers? Is there a conflict of interest?

My defence there is I don’t review books as such in Author Spotlights. That’s why it’s a spotlight and not a book review post. Having said that I have read it and thoroughly enjoyed an introduction to the YA genre. This definitely has a young teen demographic that can be enjoyed by us oldsters too.

To appease the non-biased status I’m including actual review links.

As part of the spotlight feature, I tend to ask authors for three quirky facts that people might not know. Rachael supplied nine. I figured why waste them, so without further prevarication… over to Rachael.