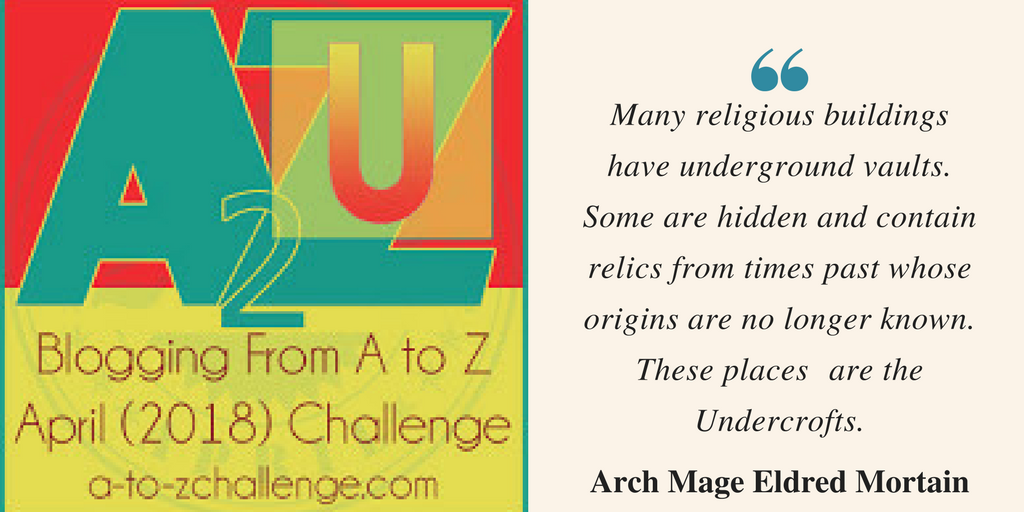 “In ancient times places of worship built secret vaults to hide relics and people under scrutiny for being different. Many have been lost in antiquity. Seekers now scavenge the lands looking for lost undercrofts.” Arch Mage Eldred Mortain.

There was an eerie silence in front, while the sounds of the night continued some distance behind. It was like there was an invisible wall surrounding the ruin beyond which, nothing dared enter. Allan was waiting for the mist to form. It always did. Oozing from some arcane rupture in reality.

A cloud drifted in front of the moon obliterating the silvery light and plunging the inside into darkness.

“Bleak maybe, or dead. What about out of time, or just empty?”

With that, Joseph stepped inside and promptly disappeared.

Allan felt the hairs on his neck stiffen while trying to slow his breathing rate and remain calm.

There was no answer. He tried again but louder, this time accompanied by wild passes of torchlight that tickled the masonry within.

Relief purged the growing panic that had threatened to take hold of Allan and send him crashing down the same hole that swallowed his brother. Centuries old stone had decided it was time to review its position of being a ceiling to a long forgotten sub chamber, an undercroft.

It appeared Joseph was the straw that broke the camels back, causing the ancient floor to give way.

“It appears a staircase has conveniently broken my fall and rendered copious injury unnecessary.”

The parchments in front were unseen by the eyes staring through them. In his mind the Amanuensis was travelling back in time. Not as far as when the Assassin plucked him from a childhood that was lost, but into a lecture where the Arch Mage was imparting olde lore.

“Time is a betrayer. It passes ever onwards and lulls idle minds into false realities. Here existence moves day-to-day, resilient to change until it falls upon them in catastrophe. Wars walked into, civilisations collapsed because nothing was done to embrace change until it was too late.

The dwarves found their mines tombs, elves forgot what they were and created a dwindling race. All worlds feel this bite while time moves ever on.

Beware of progress, embrace it carefully and above all else see the day you exist in.”

He let his thoughts drift on this. At the time it was an overseer trying to impress young acolytes. Fancy words wrapped in authority. Time, they all knew, just went forwards.

Except now… childhood had slipped away without him realising. The Keep has fallen without him seeing it. Time moved in ways he hadn’t considered. Above all else the world he knew had aged and decayed. Again this he had not seen happen until too late.

He knew now what the Arch Mage meant. He had forgotten to live in each day and see it for what it was.

Where did your brother fall?

And below was an undercroft?

“Ah, yes. I think we were the first inside since the Templars.”

And what did you unearth?

“Not much, ghosts of the past and an event that cost lives.”

The War Monks trying to find a Dragon Stone.

“Templars yes, or rather ghosts from the past. No idea what a Dragon Stone is, but something terrible happened.”

And you were told to flee?

“Yes, that was terrifying. The last to die told us to run. Called us brothers as if he saw us in their time.”

So the artefacts remain untouched.

“We didn’t take anything if that’s what you mean.”

“Undercrofts lie hidden for the most part. Some are protected, others looted and a few are known. Preserved in the places they were created because the chapels and monasteries remain in use. Many of these have become fortress like, bigger, more affluent and places revered. Housing priests or sorcerers and mystics. Different things in different worlds.

Seekers are used to find the lost places. Recover relics or parchments. These are a branch of the Assassins trained in Rune lore. Often sacred places wish to remain lost. Some deliberately so. Destroyed so the undercrofts sit under ruins and layered in stone. Wards are cast upon these and beasts sought to guard them. The Seeker must be able to combat all unknowns.”

The Amanuensis continued reflecting on past lectures. Why so much effort to search for lost artefacts. Did they exist? If so, what was so special that they warranted specialised Assassins to unearth?

The world before the sacking was so much simpler. Days were structured, learning progressive. None of what followed expected, or wanted. It was an idyll that now seemed no more than a dying memory. Imaginary, unreal and gone.

It made him angry. Frustrated that nobody saw it coming or tried to stop it. Seers, Readers and Sorcerers. Surely some had the power of foresight?

He felt his mood shifting into melancholy. The Necromancer had called him by the same name. What if the collapse wasn’t predicted because it came from within? Treason opening doors for the vanguard of a Dark army to enter.

What if that betrayer was him?

“Back so soon Amanuensis?”

Was there a traitor? Is that why the Keep fell?

“You know the answer already.”

“That is for you to learn.”

Is this a test?

“If it is then you are failing.”

Is there nothing you can tell me?

“Not yet. Remember the teachings Boy. Knowledge is earned, wisdom nurtured. Nothing is given freely. If it is then you ate vulnerable to lies and deceit.”

Not yet. Then you do know more.

Can you offer nothing?

“I already have. Remember where you are. The Keep has its own undercroft.

Why can I not remember the way to enter the Vault? Was I of sufficient rank, in the right Order and even worthy? The pressures of awakening here with no knowledge of how, or why were crippling.

I must remember. The runes and magics of this office. The Amanuensis must have access to the Vault. I am the Scribe, the lore master and keeper of the libraries entire.

So why have I not visited the other layers? Investigated the depth of sacking, sought the chambers within other Orders.

A memory stirred. In it has hand pushed on a great oaken door. It opened upon a dark passage through which he passed back through another door which led into the room he had just left. A distant memory and yet… fresh somehow. Had he tried to leave the upper most reaches of the tower already?

If so then the ice prison was condensed into this library and it’s vista across the landscape. He was trapped at the furthest point possible from the Vault.

What did that mean? A trial or deliberate incarceration after some heinous act?

Words echoed in his mind… the Necromancer lies…

Allan stepped across the threshold and felt the air grow very still and focussed. The outside world ceased to exist, although the moon was allowed in. Watching as it had been since the first foundation stones were laid in an era time had erased.

In front of him, some ten paces in, was the point at which Joseph and gravity combined to drop the floor to a lower level. He knelt down and discovered the collapse was more than it seemed. It was square in section and timber lined. Or had been until the worm had turned it to dust. A remarkably well-preserved iron ladder dropped vertically onto the top of a steep stone staircase that descended downwards, leading to where his brother had fallen.

Curious, he thought, why brick up a staircase?

Allan suspected the frame originally held an oak trap door supported by the timbers and, judging by the floor between it and the main doors, there was evidence a wall, or some other structure, once separated the two, making it invisible from the entrance. How long has this been forgotten and out of time?

He lowered himself carefully down the ladder, testing each ancient rung before committing his weight. It held true, delivering him to the top of the stairs.

“You down there Jo?”

“Yeah, but you really are not going to believe this.”

Allan stood for a few seconds taking it all in. The stone was claustrophobic and the stairwell cold and dry as bone. Sound was hollow and centuries of dust lay scattered where Joseph had fallen through. The cracked stones lying crumpled at the foot of the ladder. Following his torch beam Allan began to descend.

It seemed an age inching down the worn stairs, but probably less than ten minutes in reality. At the bottom they opened out into a rectangular vault no more than seven feet high.

Joseph was still on the threshold looking in.

The brothers Carmichael did indeed stumble into a Templar chapel’s undercroft. This is related to The Monks of War referenced earlier. From there it leads in circles around the Black Marsh.

The Amanuensis is starting to create deeper issues in this challenge now. I know the end is close, but he’s eating time. No longer just narrating about my manuscripts, but forging a new one in my mind.

I hope this does not cause the rest of the challenge to become impossible.