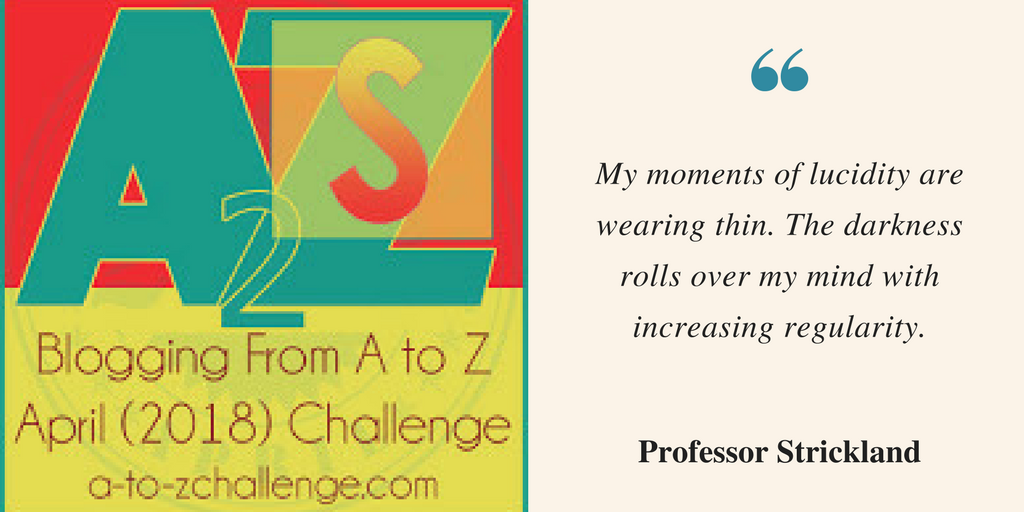 Professor Strickland, lecturing archaeologist and collector of supernatural myths and artefacts. A hobby leading him to Rome and a mirror.

Off the computer may have been, but it now displayed white text on a black background headed by the words “To whom it may concern.”

Emma let the towel she was drying her hair with fall to the floor and sat down in front of the screen.

It is with great sadness that my time on this earth is drawing to a close. Prematurely driven by an artefact that was originally removed from this very house around the time of the fire in 1875.

My moments of lucidity are wearing thin. The darkness rolls over my mind with increasing regularity. I feel it is a predator driving my conscious to another place where it festers in haunted memories. Growing old is a curse our genetics were never devised to combat.

I find my clarity of thought drifting into darkness. Places that also feel real. Sometimes it is backwards in time to parts of my life that were fond memories

were fond memories. It may sound odd, but it feels like they are being relived….until I wake up, staring into the artefact that stares back. There is something about it that drains my conscience.

I no longer know what is real and what isn’t. Is this what dementia feels like? I once considered it was a gradual degradation of the sense of self as brain cells atrophied. Now I am not so sure. I am conscious, but in another place.

Emma blinked back tears. Her hand trembled and thoughts of why the machine had turned on escaped into grief. It looked like parts of a journal, but there were no dates. Deliberate extracts. She knew he had files of notes and thoughts, written up in countless archives and, in all probability, stored all over on multiple platforms online. Strange she’d never thought about those. Another thing to muddle over during probate and finalising selling the house.

Her heart sank a bit more; losing one was hard, but both was swinging between okay and god damn awful. She pressed enter and the screen moved on.

Marsh Bank House again. Tranches of pages scripted to this weak spot between worlds hovering, as it does, right next to the epicentre inside the Black Marsh itself.

The Amanuensis performed a mental recap. The home of Elisabeth Beechwood, tainted by a bricked up child that died in a stone crypt in the cellar. Burned alive in 1875 as fire raged through the house. Renovated in time and taken over anew by Professor Strickland, his wife and daughter Emma.

More pages flipped. He bought something and it opened a new door bringing death and betrayal.

“You aren’t with her are you?”

“The woman in the mirror, beguiling and laughing. Taking more and more each time.”

No, tell me more old man.

“It’s cursed. She shines and I lose my mind. Wake up hours later and can’t remember anything.”

“I am losing my mind though. It’s addictive, looking that is as she smiles back. It’s evil, I’m sure of it.”

How long has it been in your possession?

And already you fear for your mind?

“Yes, and for my family. She consumes everything.”

Now there’s something new. Although this mirror sounds familiar. Artefacts were not unknown in sorcery circles. Dark magi were renowned for using every day items to curse and twist the owner to their will… or worse.

The vision of a beautiful woman who drew one in wasn’t something he was familiar with. If he heard Strickland true then this one sucked the soul away leaving behind a husk.

Missing time though. He reached into the archives. As with The Paradox Man, chronology was skewed. His timeline wavered and fluctuated in and out of synchronicity. Where was he in the missing sections?

Outside in the cold air, that thought persevered. Where was he? Where was the grave watcher? And where have I been? It struck him now that his own book would show discrepancies. It might reveal where he had been too.

A fist knocked more snow from the battlements. His book, of course, like all the other Orders was hidden and sworn to secrecy. They all rested in the Vault.

This is his house yes?

“It’s mine now, along with all the chattels inside.”

“You’re too late for mum too.”

What happened to him?

“I wish I knew, he just went into himself. He lived for travel and collecting. It just stopped suddenly and he withered away to nothing.”

He lost the will to live?

“I think so and shortly after so did mum.”

And you Emma, what about you? Are you losing the will too?

Or store up for the future.

“That’s for then, now I have to go day by day coming to terms with no parents.”

Uncanny, she saw her own voice in mine. Perhaps there is latent ability in her being. Something untapped and waiting to emerge. A Seer maybe, and more than just the younglings group mentioned next. Odd the name takes the same as an Order of the Keep. Coincidence?

Time is fluxing too. The archive is not linear about these places. Something is very wrong. Either that or they have truly been doctored to excise information. In turn this means something fears the Keep.

The Amanuensis coughed as laughter failed to materialise. Fear the Keep… ruined with Orders scattered across worlds. Lost or destroyed. Aimless wanderers out of time and frowned upon by those without the knowledge. Inquisitors and hunters preying on difference in an attempt to acquiesce populations. Homogenise irregularities and raise power bases through conquest and God’s.

Chattels she had thought that day as her head rose above the attic opening. Light trickled through two arched windows at each gable end. Not enough to illuminate the room properly and not clean enough to do the word justice.

Dust was visible, drifting in sunlight coming through the window two stories up from the front door. Attic or servants quarters back in the day? She suspected there was an old staircase originally feeding this level, but despite many pretend explorer adventures as a child she’d never found structural evidence supporting that theory. Same with the basement. A subterranean cellar that just wasn’t big enough for an eighteenth century estate house. Cut in half, she concluded during her time as a Seer, must be, everything just stops at a wall that shouldn’t be there. Half a cellar.

Raises questions in young minds such as “What’s on the other side?”

By night a secret room where someone deformed was bricked up and fed through a grille. Someone too heinous to allow a Victorian family to be seen in public or associated with.

By day it was treasure. A secret room, long forgotten that contained fortunes in gold, or jewellery and tiaras. The horde of a princess forced into exile awaiting some dashing prince to restore her to her rightful place and marry her.

In the attic come servant rooms it struck her that this was also incomplete. Like the cellar, half of it was missing. Same as down below. Might be the missing staircase wasn’t missing after all, just not actually in the main expanse of house. Bricked up and lost in time.

Maybe the princess even stared through the same gable window Emma was. Although, from outside were there not two windows front and back? She remembered thinking I’ll check that when I go outside. That never happened though, a moment lost in nostalgia amidst the chattels cluttering what had now become just an attic again.

The ubiquitous family photo albums; school photos of her, graduation photos, dad in far off places, Egypt, Peru, Israel, Ethiopia… the list went on. Wedding photos of her mum and dad in an old white album wrapped in brown paper inside a box. That drew a lump in her throat. A wedding that lasted until death do they part.

Last one she’d been to was as a bridesmaid for Rose and the prat. What was his name? She couldn’t remember. Nasty piece of work and part of losing touch with maybe her best school friend.

The words outside the Amanuensis are from a WIP. The Bequest is but a working title and it has been five chapters short of an ending for eighteen months now. Which is annoying because it’s sequel has been completed. Complete with prologue so it can stand alone, but does mean I know how the first ends. Maybe time to end that book now.