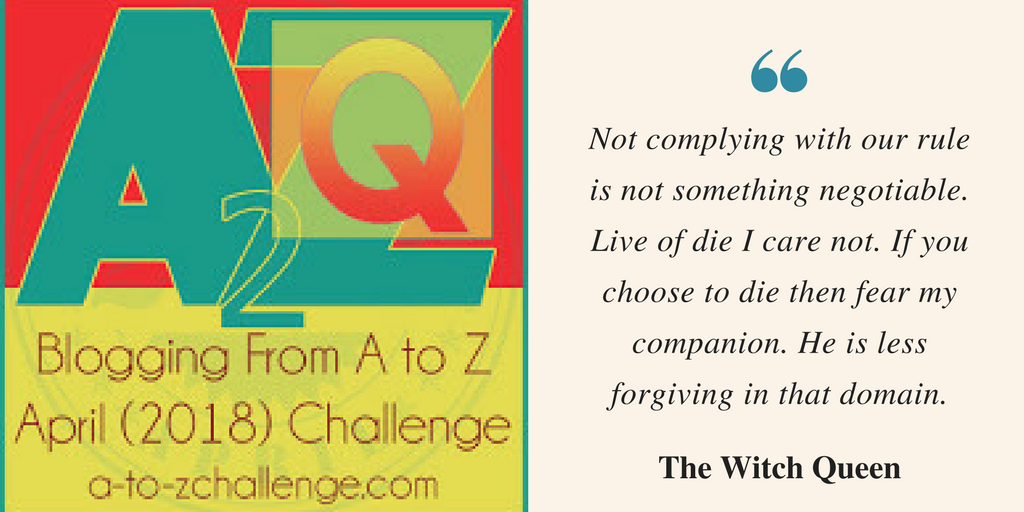 “It is rumoured there was once an unholy alliance between The Necromancer and Witch Queen. Together worlds fell and chaos ruled.” The Book of Myths and Ancient Law, Jeremiah Delalande.

He stood on the edge of the patio looking up at a moon that was not quite full, but nevertheless majestic above the copse of trees silhouetted in shadow. Stars dotted their constellations in a cloudless sky. Even the wind had fallen quiet and the night soundless.

Calm before the storm weather. Dave reflected on things while calmly breathing chill air deep into his lungs. If the scent of orange flowers and vanilla had a memory then it was spread through all corners of his mind. Wherever she had been, it lingered. It was soothing, but there was one place it had not left cleansed.

She is one of ours Dave. A temptress luring you in.

Looking inwards this part was standing above the perfumes. If scent could rot in your mind this was where it would have done so.

It called her a witch too and she has been repulsed by that too.

He sighed, the puzzle was saying Torrie was deeply connected somewhere. Why couldn’t his time be filled with simpler matters where he could just tend the dead on behalf of the bereaved. That was where his civic duty belonged. Macabre maybe but it helped people deal with grief and he felt good about that.

As he did with frequenting the Oak. These things were fixed and not filled with the unexpected. They were normal and devoid of supernatural impossibilities and people who resigned from the path at sensible ages. Or even people that walked in time and sent letters. It was wrong and against the natural order of things. Into the darkness he whispered his thinking aloud.

“Why me, what have I done to warrant all of this?”

He rested both hands on the top of the stone wall surrounding the patio save for some steps that led up to a lawn that in turn ran into the trees.

“If I am going insane please tell me, someone… Anyone…”

A breeze drew in momentarily from the east and on it rode a child’s voice.

“Because you made an oath to protect me.”

“Order came from chaos. That is traditional law and accepted cultural advancement. As time progresses this becomes the norm and old ways are forgotten. History turns to myth and monsters serve to scare children.

What if I were to tell you monsters are not folklore? While in some worlds creatures exist that do not in others, it does not mean they are not real. Each world holds chaos amongst the order. When fate, destiny or circumstances collide then order falls and the wilderness returns. Filling the air with the screams of the dying and scents of decay. Chaos returns.

Let me tell you of a myth that is real. It concerns the abomination of our magics and a Queen of the dead.”

The Amanuensis looked at several ancient tomes taken from shelves that had seen little movement in centuries. Old myths and tales handed down word of mouth until ink was applied to parchments. How much was hyperbole or total fantasy was something he couldn’t try and guess at.

His interest was in one particular thread. It spoke of a Cloaked Man and a Witch Queen. The man dabbled in the outlawed arts. If there was much truth in the scripts then dabbled was entirely the wrong word. Nothing less than an Arch Mage could command such power over nature. If he were not mistaken, the descriptions were those of a Necromancer.

Of the Witch Queen there was less. Everything was overshadowed by the Cloaked Man with no name. He’d seen an account of a Dark Mage in Ang Nafud. Of engines breathing fire and smoke blighting the landscape. Vast hordes expanding, but not conquering more than a few leagues from the border.

When the Witch Queen ascended, it was in tales of conquest and death. The armies of the Dark Mage swarmed, culling everything in front of them. Assimilating those who turned allegiances with the rest falling from recorded history.

The few accounts held spoke of an enchantress, a witch, beautifully alluring with a stare that withered those looking into her eyes. Men wanted her, none managed.

He turns over more pages. Notes filled a page at one side.

A Reader and gifted Sorceress by all accounts. None described anything but darkness though. At her side, always, was the man in the cloak. She held command and yet the Amanuensis was pulling the strings.

Was she one of his conjurations?

Are these accounts based in truth or just embellishments added in time.

“I was not myself then.”

Those butchered might not give thee much comfort there.

The Amanuensis was troubled. These event were old, very old. So far back written treatises were future lead.

Another thought, time is not linear across worlds. The myths might be started by travellers, those crossing boundaries few know exist. Even within worlds time could be displaced. The Paradox Man was proof.

But so far back in living memory, before written Scribes laid the bones of history into ink. This dark Mage would be ancient. Older than some worlds. It was just not feasible. Not logical… and yet… how long had he himself slept? Missing time gave no meaning to his argument.

And yet… something was troubling. The texts described a Necromancer. Could it be The Necromancer?

Surely not, that would make him impossibly old.

Do you have a name witch?

“Things change, that was a past I care not for now.”

Absolution is no answer to genocide and warmongering.

“Easy to say when you entire being is filled with hatred and deceit.”

How do you know it isn’t?

“You have not been swayed by the abomination.”

“One the demons talents yes.”

“How else can you describe such darkness?”

And this demon let you?

Then it was not an escape.

Love. Is that the answer to desolation, despair and torture? It was a long time ago, things change…

The Amanuensis sighed and closed the tomes. Absolution it was not.

He rolled back over something the Arch Mage once said.

“In matters that seem black and white, remember between are infinite shades of grey.  Cause and effect often lock together. Inseparable and bound. If the course is set through deceit then there may be a time where momentum can it be halted.

Never forget the Readers. A card turned and accepted binds a fate to your own. To escape destiny takes a great upheaval and carries the greatest risk of any. The loss of not yourself, but those around you. Something to consider as these are things laying in wait to haunt you thereafter.”

A fist clenched. Judge not until the facts are known.

The Witch Queen raised the bracelet arm and a horn sounded from down below. Archers were in place lining the higher ground. At least ten deep, and stretching into the distance.

Dave knew the bows would be discarded once the walls were breached and the archers would circle to cut down anyone fleeing from the from the sides. At the sound of the horn small fires lit up in sequence down the ranks of bowmen at regular intervals. These would be used to fling fiery arrows into the city.

The noise from below was fearsome. Three clashes of sword hilts or spears on shields and a resounding grunt of a war cry, over and over. Dave thought the noise alone might crack the stone work drawing up some arcane resonance in the structure.

Ladders appeared hoisted above strings of bearers surrounded by a column of shields. To the right of the Witch Queen a beacon was lit issuing foul black smoke that billowed unnaturally toward the city. Similar fingers snaked towards the walls from another that spawned on the opposite side of the battlefield.

Somehow Dave knew the only eyes this would enrage would be those trying to mount a defence. Snorting exhalations roused him back to the field below as the beasts drawing the siege towers and engines took up the strain of tightening chains that bound them to their burdens. The war beat thrumming, resonated louder as the smoke close and advanced on the battlements.

An explosion rocked the walls and Dave could see fighting around the city gates that now lay in tatters. It seemed the Cloaked Man was not the only insurgent within the citadel. Fires sprang up in several places and two further explosions sent stone hurtling through the air breaching the barrier in gaping holes.

That coupled with the main gates left defence almost impossible. Dave knew this battle was already over before it started. The archers launched waves of arrows, many bearing flame, down onto left and right sides of the city. He could see small figures dropping and could only imagine the carnage raining down.

Hoof beats thundered as, from the rear of the legion below, war horses followed the line taken by the archers encircling the city and moving to occupy the land all the way to the ocean. Escape was now not an option. There was a final three beat crescendo and final guttural roar and the black army began its charge.

The Witch Queen was smirking. A twisted smile with blue eyes staring at the assault below. She turned swiftly, exposing a flash of inner thigh as the skirts of her battle dress briefly flew open.

This is from a work that has never entered my blog. Book one is written and has sat waiting for successive volumes to begin. As the Amanuensis is finding, other works are tied in too. I suspect by the end so will he.