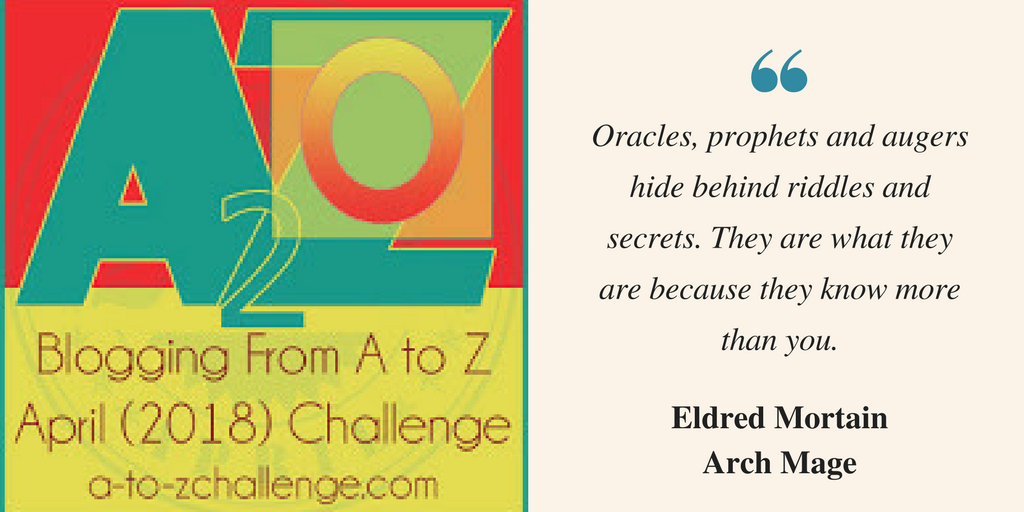 “Seers are abundant. So are tricksters . When it comes to Oracles and Augers ask yourself one thing. Why do I not know the answer to my question?” Arch Mage Eldred Mortain, “The Principles of Divination.”

The mountain was impassable and the journey to the east would take many days.

Seek the path beyond the veil.

Seers and oracles; he rested on his staff exhaling deeply. Why not just say there is an old way beyond the waterfall? Or was that too obvious? Time would tell. He could reach the edge and make camp before nightfall.

The way was bleak and the old path barely visible between stands of old wood. In times past it was clear and edged in green ferns with branches looping overhead rich in greens and pink blossom in spring. He remembered this from the vision gifted by the Oracle way back at the Dragon Stones.

Through the child’s eyes he had come to greet the foot of the mountain where the water ended it’s fall from above. There the gift had ceased and it was down to him to choose what followed next. The reality was not offered in the dream though. Here it was much changed over that. The whole landscape was a ghost of the past with angry skies looking on in dismay along with the Gods that watched over all.

It was said they hurled lightning and thunderous rain storms for half a year after the last dragon fell to wash away the shame of the alliance of Dökkálfar and Men of the North. Forever after that would the land remain in decay with the forest marking the edge of life until such time penitence was paid when life would be restored to the wastelands.

Extract from “Letters of The Amanuensis – Oracles and Augers.”

“If in doubt seek a prophet or auger. An easier route than exploring the biggest fonts of knowledge in existence.

Acolyte, this is where you begin. The library of Time.  No one can escape learning without effort, application and dedication. Anything else is for those without the patience to learn.”

True words old Master. Not so comfortable when the faculty is reduced to nothing. Knowledge from books is but a trace account of the past. An Oracle sees many paths beyond the books. Extrapolating knowledge into future events. Likely outcomes and using confusion to retain their status.

No doubt the true Oracle is a source of knowledge. But think on, this Keep holds the Library of Time. Those privy to its resources need not seek Oracles for advice. This institute creates them.

Or did. Unless that was a dream and The Necromancer was right.

In which case… was he imprisoned inside an old Keep locked in ice?

Is that not what you claim to be?

“No idea what you’re on about.”

“Err, yes. I’m not exactly a fountain of knowledge.”

Then you have a title bestowed upon you without your consent.

“Seriously, what the heck are you on about?”

Your timeline seems too early. Where are you right now?

“Chilling with my best friend.”

The Amanuensis considered this. Half a twin that lived, befriended by a child destined to be an Oracle. Fate is curious indeed.

He examined the chronology. Way too early. This is the beginning of their story. One coming to terms with loss and the other… yes, I shall meet her soon. Three days hence.

The dream child and the blackout girl. One by day, the other by night. Coincidence they meet each other? Destiny is a strange overlord and if it leads, then free will is less than it first appears.

He moved forwards through the years.

I have a question.

“You are not The Necromancer.”

“No, but it is burning in your aura. It lies. Do not commune again.”

“Three of those you speak with have tried. Their paths lead to conflict and loss. Another is locked inside an imagination reality.”

And the ice prison?

“A consequence of a fifth.”

“Search inside yourself Amanuensis, that answer is not for me to give.”

A great difference time makes in maturity and direction. Hard to believe this is annexed to the child from before. More so, if the books read true, if the timeline is less than a single year apart.

Something has happened. The girl corrupted and no more in the same plane of reality as before. She knows of us, the Scribes and sacking. If her words are not false then I am not The Necromancer.

He looked into the flames with vacant eyes. No, not The Necromancer, but it means not that I may be A Necromancer. Perhaps the fifth she referred to. The one that corrupted this Institute and opened the doors to rip the Orders within across all time and space. Into other worlds or simply extinct.

Could it be Elite and War Monks were factions splintered outwards? Relics of Assassins and Guardians. Or Oracles and Augers sent in spiritus to dwell in others?

If so then Magi and Law Bringers would also rest in other places, but where?

Was it his role to find the pieces and restore order from chaos?

Or, was it his role to relish the destruction and escape the Keep?

“Search inside Amanuensis, that answer is not for me to give.”

Her words were as cryptic as once decreed by the Arch Mage Eldred Mortain.

A voice he recognised resonated from another book. Dark and malevolent. The light he was staring at flickered once more.

“Do not commune again.”

Not advice, a directive. But the voice was inside another. An untouched world on the brink of dystopia and plague. One man, two voices. A ride of waves known as Patrick Wakeman.

Rose nodded. “That’s what she said too. What are you Rebecca?”

Young eyes flared upwards. “That’s not fair you know. I’m here, I’m the one who remembers what happened to me. Took away my friends and dumped me in this place. Sometimes in a screen like that one.”

She pointed centre and front to the one running static. “Sometimes I hear them outside talking. Saying what a shame, how nice I was and conversations that start with shall we switch the machine off until someone says not here, the patient might be able to hear you.”

A tear rolled down her cheek. Maternal mind dropped in and Rose moved to kneel in front of her, taking her tiny hand and delivering a gentle squeeze. A squeeze that reminded her of some place else. Some latent memory, deja vu, one of those “I’m sure that’s… but can’t quite remember moments.” Her eyelids moved. Or something like that and through the fog someone holding her hand. Except, wasn’t that a dream about being dead?

“We’re not dead you know.” The raised voice brought Rose back into the room. Or was it the tower, the control centre inhabited by her own mind. The clear one blockaded in to avoid dealing with the crap leaving the unclear one walking about outside in a fog masking out the past and living like a…like a…what? Passenger that keeps missing the train of life.

“You said last time. This is where coma minds go when they get disconnected from their body. Except this feels real doesn’t it?”

“All dreams feel real at the time.”

Rebecca tilted her head. “Then this becomes reality. I thought you grasped that last time.”

I’m now confused so it goes without saying anyone reading this will be in a far worse position. Blame it on Challenge head and stream of conscious writing AKA pantsing. The former a borrowed term of a blog I came across and book marked somewhere with the intention of having a go. I will credit that blogger after this challenge when I’m less muddled!

I may even start asking which direction to take this Scribe in too. I feel there are two real possibilities here. One being he is an innocent and deliberately cast into his role to bring order back, and the other as instrumental in its destruction.