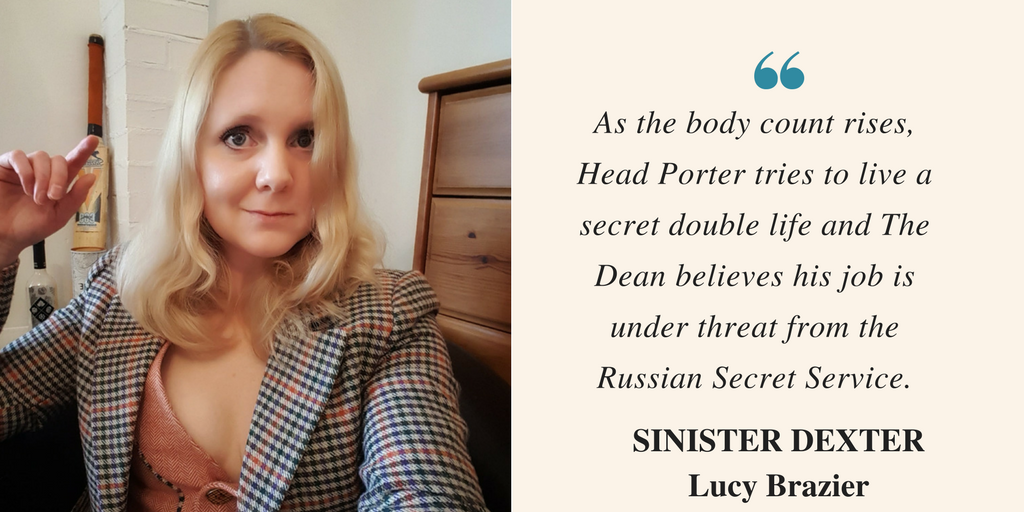 This is the third instalment of the world-renowned PorterGirl series set in the ancient and esoteric Old College. Author Lucy Brazier opens the lid on a world which has sinister overtones in this cozy, BritLit mystery.

I am pleased to invite my wonderful friend and author Lucy Brazier back to celebrate the imminent launch of her new PorterGirl book entitled “Sinister Dexter.” This is the third instalment of this series and is available for preorder now with the actual launch on 27 April 2018.

I now pass you over to Lucy herself.

How wonderful to find myself back in the friendly and familiar fold of this, one of my favourite blogs (me, thank you Lucy). And rather sooner than I expected, too, as the release of new PorterGirl novel, Sinister Dexter, has been abruptly brought forward to, err, now. Well, it’s available on pre-order (general release is 27th April) but I wasn’t expecting this to happen for another three weeks so please excuse me if I appear a little disorientated.

The reason for this sudden flurry of literary activity is, apparently, the urgent and rather cynical need to take advantage of current events – the main villain of the piece is a suspected Russian spy with a penchant for poisoning people. But whose side is he really on?

Sometimes the opposite of right isn’t wrong. It’s left.

Tragedy strikes once more at Old College… The Porters’ Lodge is down to its last tea bag and no one has seen a biscuit for over a week. Almost as troubling are the two dead bodies at the bottom of the College gardens and a woman has gone missing. The Dean is convinced that occult machinations are to blame, Deputy Head Porter suspects something closer to home.

The formidable DCI Thompson refuses to be sidelined and a rather unpleasant Professor gets his comeuppance.

As the body count rises, Head Porter tries to live a secret double life and The Dean believes his job is under threat from the Russian Secret Service.

Deputy Head Porter finds herself with her hands full keeping Old College running smoothly as well as defending herself against the sinister intentions of the new Bursar.

Spies, poisoning, murder – and none of this would be any problem at all, if only someone would get the biscuits out and put the kettle on…

After avoiding the murderous intentions of The Vicious Circle in First Lady Of The Keys and risking life and limb to find a priceless missing painting in The Vanishing Lord, our heroine Deputy Head Porter finds herself once again at the centre of strange and macabre goings-on in the notorious Old College.

One of the oldest and most illustrious educational establishments in the country, Old College boats a bloody and turbulent 400 year old history and the arrival of its first female Deputy Head Porter has done little to calm matters. If anything, it’s made them worse. We join Deputy Head Porter at the beginning of a new academic year where the induction of a new Bursar – the enigmatic Professor Dexter Sinistrov – causes ructions. With his first act of office being to cut the tea and biscuit budget for the Porters’ Lodge, he makes himself instantly unpopular with the bowler-hatted staff within. But it is more his penchant for poisoning people that really concerns Deputy Head Porter.

Meanwhile, Head Porter appears to be leading a secret double life and The Dean is convinced that Russian spies are after his job. When two dead bodies turn up at the bottom of the College gardens, Deputy Head Porter is determined that there will not be another College cover-up, even if that does mean begrudgingly working alongside unwelcome outsiders DCI Thompson and DS Kirby. Add to that a wayward College drinking society and an ageing Lothario of a professor and Deputy Head Porter really does have her hands full.

Further Information About the Author