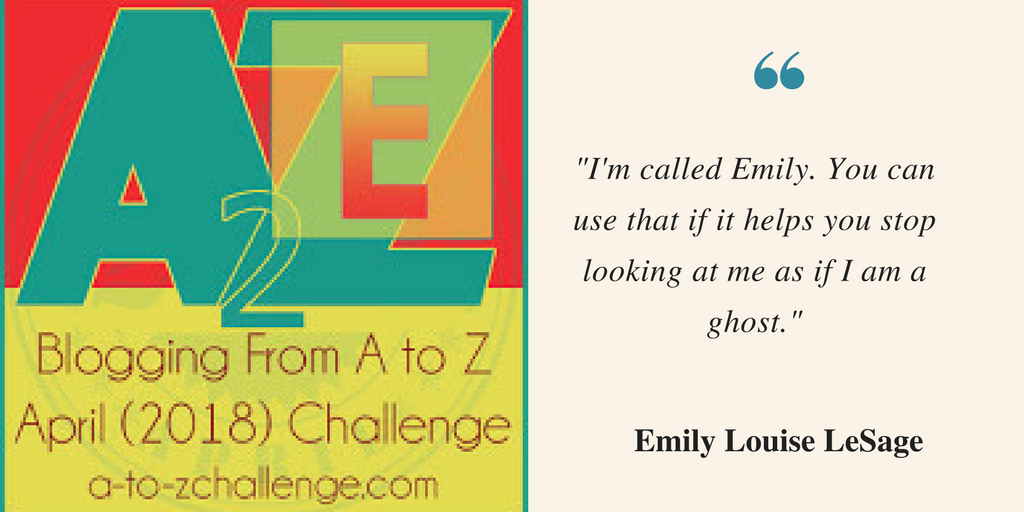 When a sibling passes on the remaining grieve. When the sibling is an identical twin then mirrors are your enemy.

Emily blinked and noticed her hands were tightly gripping the neatly cut grass at the front of her sisters home. She hated the word grave, too final and too soon. She was not even close to letting go yet, probably never would be.

“Don’t leave me Elly,” echoed in her mind.

The first time she had spoken aloud at the cemetery. A lie she thought, because they were moving and this was her last regular trip.

Her first words and she was lying.

Extract from “Letters of The Amanuensis – The Living Ghost.”

The girl who saw the shape-shifter and now pays in pain in pilgrimage to the grave overseen by David Arthur Williams. Another whose path fluxes between realities. Real or avoidance?

The Amanuensis prodded a pile of parchments. Nothing was clear. He sat and read on…

You are the living half yes?

“Dumbass question. Who are you?”

No-one you need to know about.

“Then why are you here?”

These aren’t dreams are they?

Do you not yet know?

What the dreams represent.

Too early. This child has not met the Blackout Girl yet. One by day, the other by night. Both leaving the present and both in great danger. Williams is tied to this girl, but how?

She grieves too much, can’t let go and suffers from demons inside. Her words say as much. Curt, abrasive and unwilling to lose hope.

Why? I must know.

Have you met the grave keeper yet?

“The old guy in the cemetery?”

Old is relative. You are young, so yes he is old.

“Only in passing. Mum asked him to keep an eye on me when I visited my sister.”

You make it appear she still lives.

“In my head she does, always will.”

But not in your world?

The grave man, you do not know who he is.

“What are you going on about?”

The end of your world.

The Amanuensis stood on the ramparts of his keep. Outside it was cold. Winter had fallen upon the land. The twin that lived didn’t know the grave keeper, David Williams yet. In turn she did not know of his former role overseeing the road where her sister fell.

He drew the cloak tighter and watched snow drifting below over a moat that was frozen. Once this place was so much more than a relic of a time gone by.

It saddened him. A fist brushed snow from a fractured crenel. War was an untameable beast.

Back at his desk he read some more. Back in time. 1875, the living girls world. Cause and effect. The Fire Starter.

Dave’s heart jumped for the second time that afternoon. Sad she may be, but damn astute and clever, psychic, if he was not mistaken. Still, the anger had bled out and maybe she would hear him out now. After that, she may still despise him, or worse.

A few years yet afore she’s ready, but she will pay you back.

He swallowed, remembering the conversation, no longer sure if was real or his own destructive mind trying to play tricks on an already fragile ego.

Is this what she meant, or did she mean an explanation for why he was late? Or both? What if he got this all wrong and she grew up wanting his head as payback.

This thought troubled even more. Killed one, turned the other into a murderer. The voice would just love that.

“I’m called Emily. You can use that if it helps you stop looking at me as if I’m a ghost.”

Emily stared into Dave’s eyes. “Windows of the soul,” as Grandma often said. Along with “Watch close and they will give away lies.”

She saw a lot layered within them, and rather against her immediate emotive disgust at his grave watch, found herself beginning to feel just a bit sorry for him.

“What makes you think that?” he asked.

“I see her every day in my mirror. I know what it looks like.”

Now her gaze dropped. A conversation she didn’t really want was about to happen, but there was no way out. They walked back to the lodge.

Dave cracked. He sat in tatty leather chair as beaten up on the outside as he was on the inside. He leant forwards and put a hand on each temple. Embarrassed to look up as he began to try to put the mind muddle into something that would fix what could be fixed, and lay to bed what couldn’t. He felt water in his eyes and a big lump jamming his throat.