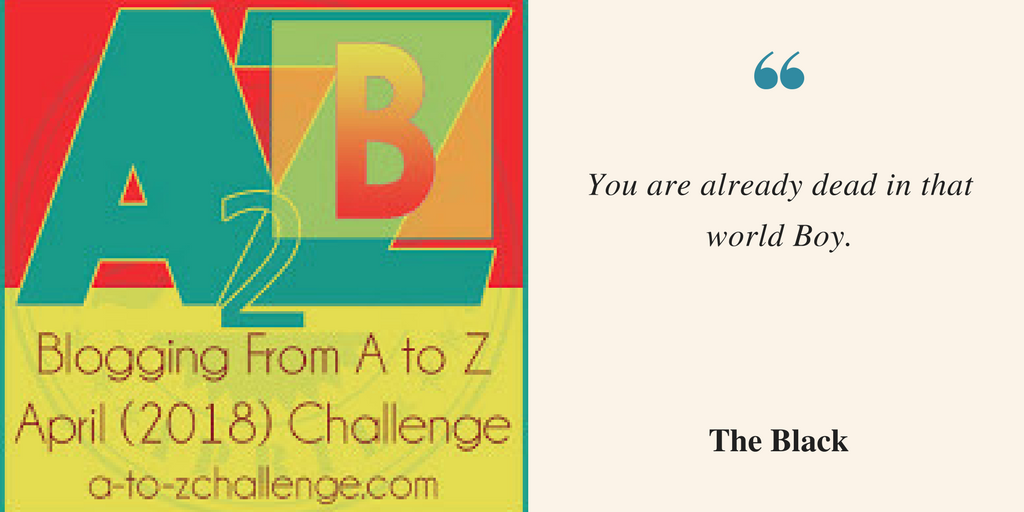 “There are other words than these.” So said Jake as he fell after the Gunslinger let go of him in his chase for the magician Walter. King spoke true. There are many worlds stacked above each other.

For B, The Black is front and forward. A dragon that will be familiar to anyone that has read the full chapter on here under Dragon Stone.

Is The Black dangerous, sinister and evil? Always there are two sides to an argument. It’s very easy to answer yes.

Wayland started. There was evil in his mind. Cold words creeping across his unconscious conscious and rich in melancholia. Glancing round he was drawn up to the plateau where The Black was reared up on hind quarters unfurling huge six ribbed wings ending in curled talons. Webs of weathered skin spread out over them and leaving the horned tips protruding at the rear. It’s neck stood proud and layered with scutes whose edges shimmered in a purple haze where the sun reflected. It was the eyes that captured Wayland; for these were settled right upon his.

Extract from “Letters of The Amanuensis – A Chronology of Events – Private journal.” Edited.

I’m looking at parchments describing a battle, treachery and annihilation. The solution must be here. It has to be. Dragon Stones join the dots, but where are they all?

Two. There are two found. A black and green. Hard as obsidian and glowing in the hands of those joined to their beast. The blacksmith has one and a wizard another. Black for the blacksmith and The Black beast. Figures. But the green glows not. The wizard has yet to find his dragon.

I believed they were all dead and long gone. The dead fields glow white in bones when the sun rises. Man, elf and beast together. I must know what the wizard seeks and where the Smith lies. I will try to commune with The Black. It is dangerous, but I must know.

That was foolhardy. The beast is neither dead not living. It is a relic out of time and space. Despite my protections, it…

I must know. Why is it not gone like it’s ancestors? Why is the Smith connected? I must explore his trail more. The wizard too. These stones are powerful and remain undocumented.

The Amanuensis rested his head upon hands that were locked together. Beside him the parchment used to commune with The Black lay withered and scorched. Unreadable.

To his right in another pile of notes rested waiting to be examined once more. C for child. Another piece in the jigsaw. The girl who should be dead, lived in another world. C for Chloe LeSage.

Atop a cliff, some leagues away, The Black saw the man crouch down and stare into the dragon’s eye. In that moment it saw more of the mind inside the flesh. Haunted and split in two worlds.

Locked doors hid memories the Smith was no longer seeing. The dragon knew the man was dead in the other place and walking this one with purpose, and not knowing why. Muscles flexed along its spine and Stygian wings unfurled with the rise of head as its maw moved side to side tasting the winds. Death and silence still reigned in the lands this side of the forest barrier, even now after so very long.

The beast knew where Wayland was travelling; he had the Eye after all. Picked up off his slain rider at the end of days when dragon kind was swept from the world. None but The Black remained and he was as dead as the Smith in another world. A shadow lingering in the wastelands haunting those that bled through in death. Lonely in vigil over a once sacred place that now housed the remains of the past.

Ethereal white fire filled the sky in rage and anger. The Smith was safe as long as he bore the Eye of the Black.

I hope this proves entertaining for some. For those who know of my work then it might seem muddier than it did before. The Amanuensis is searching, like me, for answers in unwritten manuscripts. His notes are invaluable and it is a privilege being able to examine his texts. Limited though they are.

Feel free to pass judgement in the comments section. All words are welcome. More so with The Blacks tale which is destined to be picked up again this summer.