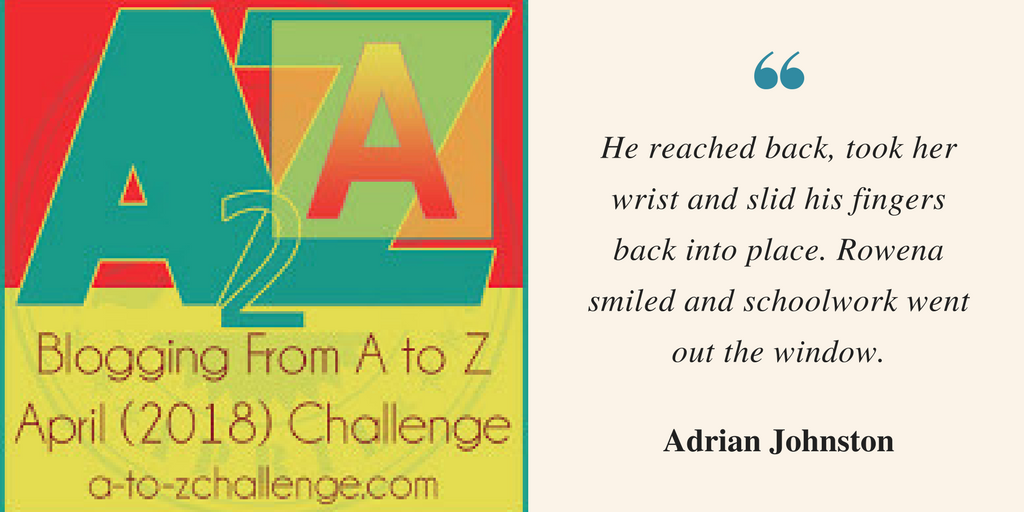 “Ade knew this to be true though. After all his generation were obviously the first to actually be sixteen…ever.”

As a challenge to a writer, the A to Z presents an interesting twist. Short and sweet, very unlike my writing style. Right or wrong, if there is such a thing here, I’ve decided to explore my four unpublished manuscripts and the material supporting them.

Out of these will come excerpts, creatures, and characters. Introductions to elements of my works in progress through back story and “interviews.”

First up is one of my personal favourites, Adrian Johnston, or Ade for short.

Ade first appears in The Bequest and forms one half of a partnership with another favourite, Rowena the Goth.

Adrian “Ade” Johnston was a bright kid that mixed with the wrong ones after his parents took their eye off the ball. Easy to do moving from toddler through to adolescence. Those days are cute. Maybe not at the time but, looking back, Pamela and Carl figured those were the times before “Get out of my bubble” and “What do you know?” appeared. The realisation that every new teen cracks open, older folk were always old and don’t know the minds of teenagers. How could they? They’re old.

Ade knew this to be true though. After all his generation were obviously the first to actually be sixteen…ever. Thirty seemed past it, unreachable, never going to happen. Folk older than that were just wrong. They were the ones running the world and screwing it up. They should all be put in homes until they get too old to have a say. Might be folk would just get along fine then. Only grandparents knew stuff. Well they had when he was a kid. Tales of the war, real stuff from history that even the Internet knew about. Gramps had been in it. Really in your face, up to the eyeballs, proper in it. He had medals too, and that way of avoiding details which, to an empathic minded child, says “Hey, you really were weren’t you?” As opposed to the hyperbolic crap most of his current mates said. Teens for you though. They all did it and they all knew they did it and that was just fine.

Extract from “Letters of The Amanuensis – A Chronology of Events – Ade” Heavily edited to avoid revealing matters best kept secret.

Ade, why so bitter at the World?

“Money was never love really. I didn’t get it until upper school and Gramps died. He was love and my parents tried to buy it. Looking back I was always on my own, even as a child. Sitting their surrounded by toys, nobody to talk to. Excitement turning to dust as each year passed. Reality crept up slowly at first and then cascaded into depression.”

What changed? I gather there was a keystone moment when it could all have gone very wrong.

“The one who came to me at school. She cared enough to ask about stuff. Rowena the Goth was how we all saw her. Weird outside school, untouchable, always looking aloof and intimidating with her friends.”

“Damn no, bit of a front really. That black and purple with silver bangles and stuff was all a front. Dress how you feel kinda thing. She asked the right questions too, because she knows how it feels. Row is probably the most intelligent person I know.”

And did you believe in, shall we say, spirits, ghosts and the supernatural at that point?

“Hell no. I had more than enough demons haunting me inside to consider anything like that existed in the real world.”

The Amanuensis frowned at this point, a gnarled finger, dripping with age, circling the next part of the Letters. Metaphysical interviews held deep in the sub-conscious were always a tricky art. On his desk rested tomes and parchments listed under “The Bequest.” Illuminated in the flickering light offered by two candles that burned indefinitely.

B was next. Dragons were unpredictable at the best of times, but The Black was something else. Not living and not dead. This made it dangerous.

“If you ever need to talk Adrian..”she left it unfinished. Not that a sentiment like that needed terminating. It is what it is. An offer of friendship, maybe more.

The school bell ended lunch. They walked back holding hands until they neared the main buildings where they separated. Not cool to be seen with a girl during school. That’s a tease job waiting to happen. Sixth form acceptable, but a year too early.

Sod the world, he thought, that’s crap too, like the lock up ages.

He reached back, took her wrist and slid his fingers back into place. Rowena smiled and schoolwork went out the window.

A is for Ade and Amanuensis. The former is the character, the latter is something else. All I see is the desk and shadows cast about him. Two candles that never grow small, and always he is looking at the secrets he wants me to write.

In future, I may exclude my voice and use only those of the manuscripts and the scribe.

I trust this might be an acceptable format for the A to Z challenge. If not then feel free to offer up your thoughts in the comments section and thank you for enduring this inaugural attempt.