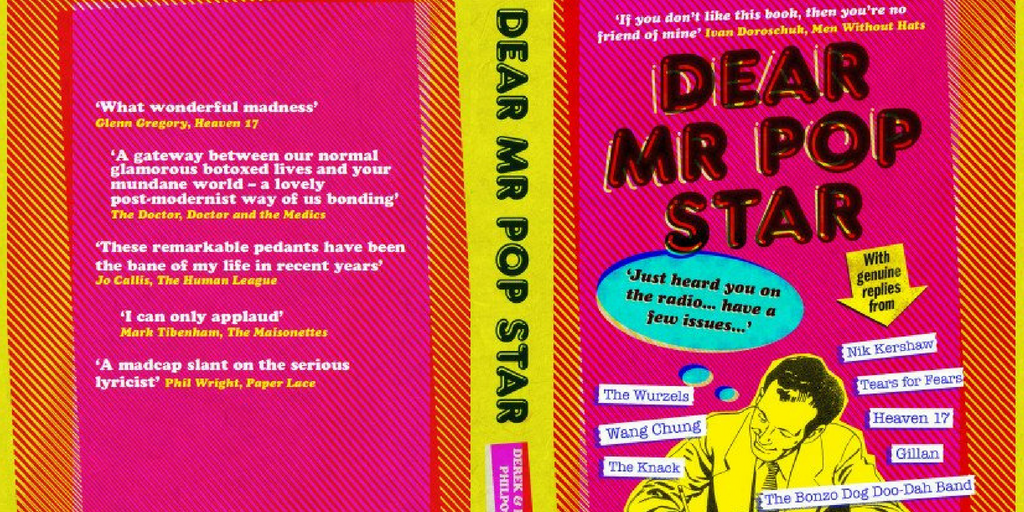 “I have passed your letter on to my lawyer, a restraining order will shortly be in place. Let that be the end of it. What wonderful madness.” Glenn Gregory, Heaven 17.

Previously I spotlighted a book. Not an ordinary book. This is no fictional epic, no dance with elves and hobbits, no creep-show based in Maine. In fact it is something far more entertaining.

Pop-stars, until 2010, were unaccountable for waxing lyrical to fill a tune with words making no sense at all. They resembled politicians who ramble convinced they know what they are talking about whilst churning out sound bites to baffle, confuse and bore us into submission. Whilst politicos refuse to answer direct questions, two pensioners decided reaching out to pop-stars might be a bit of a wheeze.

2010 was the year things changed, these untouchable leviathans of rock and pop began to reply. “Dear Mr Kershaw” was born and book one was in the bag. Filled with letters and replies from a huge range of musicians past and present.

I won’t reiterate the minutia of that one because I’ve already featured that before. Suffice to say if you are so intrigued it can be found here:

I also mentioned back then that a new project was in the making. There is now a second book imminent. The blog tours go live on 15 September through 15 October. Almost 80 bloggers have responded to the call to action. That will be an amazing month for Philpott and son (Please tell me that’s now on the van Derek…Ed), with two a day and three on some. Remarkable for a self publishing project and marketing. That said, the Facebook following is rich in amazing people, including some of the pop-stars, fully backing the project. Really think you’ve finished with two books lads?

As with “Dear Mr Kershaw” this was crowd funded, this time by Unbound, and rapidly hit target taking matters into print. At present there are 700 waiting to be despatched directly from them. Actual sales go live on Amazon on 20 September 2018 and are available for pre-order now in the UK and on Unbound.

For those unfamiliar with Unbound as a publishing platform the link to Dear Mr Popstar is here.

From there you can navigate to the main site to see how it works. The above page also contains purchase links, although single signed hard copy pledges are sold out.

Derek himself has taken more of a backseat and the mantle has passed to his son Dave, with whom I’ve had enough discussions to know the excitement and workload that has gone into a totally new book. No best of, or greatest hit compilations here. This is entirely new material and even more artists willing to be confronted with a “Dereking.”

“Thank you you for your letter. It has changed my life. I folded it up and used it to stop my coffee table from wobbling.”

Enough preamble, time to get on with it.

The book contains around 100 letters, some included simply because they were sent and are as yet unanswered, but require airing due to the cantankerous issues they confront. Just to be clear (top politico statement rendering nothing following will make sense or, indeed be relevant…Ed.) these simply mean a response is not yet inbound or an aged mega-star might have passed on. Sadly in recent years that has been the case for many. RIP.

The greater portion have very considered replies. The tones are multifarious, all are worthy of a read and the spirit of enquiry is retorted irrespective of the tone implicit in the responses. I know this, I’ve already seen the book in proof form.

“Derek, hopefully sales will be more robust than your intellectual rigour should the proposed ‘Dementia Tax’ come to realisation.”

Here are some name drops taken from the Unbound Page.

“Having not had that many hits in my 40 years in pop, I assume this is possibly the last I’ll be hearing from you…still, it’s been fun!”

I’m told there is an absence of good images with both wordsmiths onboard.  I asked about a profile image last Saturday. Apparently Derek loves the caricature. Since I’ve known the kind chap for many years it would be rude to omit that. Dave however, in consultation with Philpott senior supplied me with the outcome of their photography discourse. I make no claim to be calling them “deranged writers.” Just to be clear!

Derek and Dave Philpott are the nom de plumes of two ordinary members of the public, working with help from a small family and, crucially, a worldwide social networking community. Neither they, or anybody assisting with the creative aspects of this project had any connections with the music, entertainment, media or publishing industries whatsoever at the time of its commencement. Despite these humble origins, however, they now find themselves in the bizarre but enviable position whereby many pop stars and people within these circles are their friends “in real life” (whatever that means!). Many artists consider “getting a Dereking” as a badge of honour.

“Team Philpott’s masterful oeuvre, with their infallibly astute and uncannily insightful interpretation of popular songs, has raised the world of pop-music criticism to the level of ‘high’ literary art! (Which is also the recommended state for fully appreciating their comic genius!)” Dean Friedman

“Thanks for the brilliant work and for allowing me to fence with such a couple of formidable comic swordsmen.” David Was, Was Not Was

“Agateway between our normal glamorous botoxed lives and your mundane world – a lovely post-modernist way of us bonding.” The Doctor – Dr. & The Medics

“I meant every word of it. At least I think I did.” Richard Jobson, The Skids

“Thanks for a madcap slant on the serious lyricist; as for myself, I am from a very musical family – even our sewing machine was a singer.” Phil – Paper Lace (original)

“If you don’t like this book, then you’re no friend of mine.” Ivan, Men Without Hats

“These remarkable pedants have been the bane of my life in recent years; one can only wonder at what they would possibly glean from such works as T.S. Eliot’s ‘The Wasteland’, or ‘The Ballad Of Tam O’ Shanter’ by the great bard Burns his self. On behalf of all concerned, please don’t do a poetry book, we implore you. Well done again and all the very best.” Jo Callis (Mrs.) On behalf of The Human League

“My oh my Derek, when this is over then Everyday will ‘hurt’ without you!! I need to pick me up a Strange Little Girl!!” Dave, Sad Cafe

“Sirs: I can only repeat my response to your last enquiry on this subject: I’m sorry, but I am NOT interested in purchasing your book, ‘comic’ though it may be.  I trust this puts an end to the matter, and I will have no need to write you a third ti– oh, wait a second, I might have gotten…Congrats on your new book! Eagerly awaiting my copy, I remain as ever.” Berton Averre, The Knack

“I will forever associate you with my wife’s wonderful words – Have you replied to that bloke yet?” Kimberley Rew

“Does this have anything to do with the copper top frying pan I ordered? If so, can you include the 3 finger oven mitt… Thanks.” James Lowe, Electric Prunes

“It’s not often the drummer in the band gets to speak, apart from ‘Where’s my bleedin’ wages?’ So thank you chaps for the opportunity to spout off a load of ol’ drivel for your hilarious project. The pleasure was all mine.” Gary Long, Tadpole Tuna

“Being the most successful pop musician in the suburb of Royal Leamington Spa known as Milverton…which is in need of more social housing for young families…I can only applaud.” Mark Tibenham, The Maisonettes

“Dear Team Philpott – Your book is going to change my life – I shall probably never work again.” Bruce Woolley

“In which I answer the musical question…erm…what was the question?” Chris Butler, The Waitresses

“It was a thrill to receive your enquiry and an honour to be able to respond,” Will Birch, Kursaal Flyers