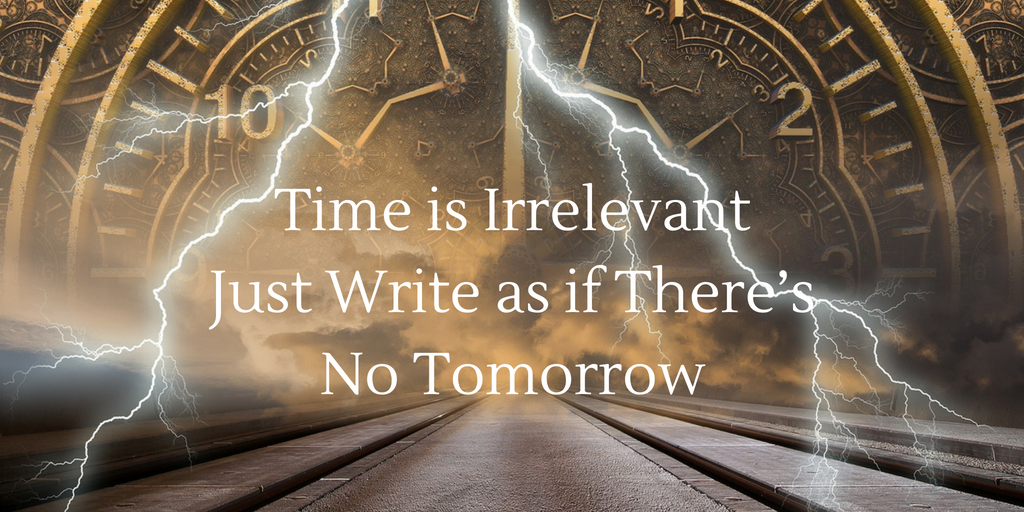 Do you ever feel it’s taking too long to write your novel? What if I told you there is no prescribed timescale. Avoid internal pressure by learning from Ritu.

Writers create books in many ways. If you’ve ever wondered how long it take to go from concept to first draft then consider the old adage, “How long is a piece of string?”

On my game I can write a chapter a week. If I take an average of 5000 words per chapter and look at around 80,000 words for a novel that gives sixteen chapters and therefore the same number of weeks to complete.

That is a very rough guideline and clearly variable as not all chapters are exactly 5000 words, not all books have sixteen chapters and the target zone can change considerably. It gives an idea of my own strategy though.

Throw in NaNoWriMo and pressure increases because the goal there is 50,000 words just in November.

Publishing contracts might also tie an author down into timescales for successive novels too.

But what if you are a debut writer?

Someone who has a book inside them waiting to escape. Maybe started a project years ago and got lost along the way. Does time really matter here? I believe it doesn’t and have an inspirational author to prove that point.

Allow me to introduce Ritu Bhathal from But I Smile Anyway.

This is her writing story.

One I find inspiring because of the determination to finish something started eighteen years ago.

“As a mid-twenties girl, about to embark on my own marital journey, I had an idea.

It was the bones of a story for a novel.

Everyone has a book inside them, so they say. Maybe this was mine!

I started writing this story in 2000, not realising the journey I would go on whilst this book was being written, both as a person, and a writer.

The first year of marriage was busy. Not hard, but different to the life I was used to. It left no time for me to be faffing around with pen and paper, or a computer.

But I could hear that floppy disk calling me… yes it was that long ago that my work was on floppy disks, later saved onto CD-ROMs. Way before the pen drives and the cloud drives we are used to now!

I remember telling my Hubby Dearest about this book thing. He showed a little interest, and actually he even bought me my first laptop for me to continue my writing.

I printed what I had off and got a colleague to read it. She was encouraging and it spurred me on. I had an aim to get 1,000 words done a night. That way within a few months I could have completed my book!

But life isn’t always that easy, is it?

Being a daughter in law meant I had certain responsibilities, including helping arrange my brother in law’s wedding, coupled with the fact that we wanted to start a family.

And there it languished, this time on a CD-ROM, for many years.

Sister-in laws came and went, and my own two children took up a lot of my time, leaving that poor WIP gathering computer dust. My literary creativity was at an all-time low. Non-existent. But I still read feverishly and enjoyed sharing children’s classics with my own kids.

Around fourteen years after I started writing this story, blogging came into my life, changing it completely!

My creativity was ignited again. I was responding to writing prompts, enjoying the whole process of moulding words into little literary artworks.

I was in touch with people like me. Bloggers who were writers, writers who were authors, poets, both. It was another world, this Blogosphere, and I loved it!

Again, my WIP whispered to me… “Let them read me… maybe you’ll want to finish me too…”

So, I took that step.

I published the first seven chapters of my story, on a weekly basis, to get the feedback from all these amazing writers out there.

And the feedback was so positive. There was a thirst for the next chapter to be posted, and the story seemed to hit a note with those who read it.

I just had to finish it! So many people wanted to know what happened next, and I didn’t even know that, as I had not really planned my story in such detail.

But, for writing, you need time. I saw two NaNoWriMo annual sessions pass and was gutted that I couldn’t take part in it. November is a busy month for a teacher. It just wasn’t happening.

I managed to squeeze in publishing a poetry book though, which I found simple, as I had so much material to use, but the writing… there just wasn’t the time!

Then I got to know Gary. (Ed… This being me, which is pretty awesome!)

We have realised that between us, we are the world’s greatest procrastinators!

Gary read all the chapters and gave me great detailed feedback. He also kept on at me to get on with the writing, as I chivvied him along on his projects too.

By now I also had a small cavalry of authors who were also encouraging me to get back into writing.

I made a decision then.

If I couldn’t take part in the official NaNo, then I would do it myself.

I gave myself a target of 50,000 words, and chose the month of August to have my very own RiNoWriMo – Ritu’s Novel Writing Month.

(Read about this here)

School holidays, and children who were older and able to keep themselves entertained, meant August was the best time for me to write.

It wasn’t easy, but I prepared myself by rereading all that I had written, correcting silly mistakes as I went along. I invested in a huge whiteboard which I decorated and made into a storyboard, and really planned my story, did character profiles, checked out locations etc.

It was all rather real!

Boy did I write!

During the month, I posted weekly on my blog about the progress of the novel, and whether I had hit my own targets.

My followers became my accountability partners, along with emails and messages from a few close blog pals, and they kept my momentum going.

My kids even heard snippets of it and were always asking what was going to happen to various characters, showing interest in this story of my making.

By the end of August, I had a manuscript that was nearly 70,000 words log, and still not finished, but not far off.

I was mentally exhausted, but so proud of myself.

I couldn’t bear to look at it for ages after. Partly because of the exhaustion, but also because my work life was really tough at the time, and I didn’t want to be half-hearted about the ending.

A few months passed, and Easter holidays came. I decided to have a reread of the last few chapters I had written, and (am I supposed to say this about my own manuscript?) I really enjoyed it!

It spurred me on to write more, and by the second week of the holidays, and eighteen years after starting, I finally had a fully completed first draft!

The first day I held a fully printed out version of my first ever first draft, was a truly blessed day! (Even though I saw a spelling error on the first page, as soon as I looked at it, d’oh!)

Now, I have the rest of the journey to publication to look forward to.

From rereading and rewriting, beta reading and editing, then the formatting and cover design if I decide to self-publish or choosing to write my synopsis and send letters out to agents, in the hope of getting discovered by a traditional publication house, to actually holding a physical copy of my book in my hand.

(Read about this here)

As long as it doesn’t take another eighteen years!”

Since this original interview Ritu has submitted her printed book to two alpha readers to see if the story hangs together. It’s something I do too. Send out the first draft more or less intact. Not asking for error checking or minutia, just to see if the novel works. It serves two things.

Not everyone does that. Most probably run several internal edits and proofs before thinking time for a professional eye. In my opinion never consider publishing until a pro has picked it apart. After that use a proofer to polish the aftermath of editing. This is especially important to the self published author.

While traditional publishers do these things internally, a self published one must do it themselves. No author will be able to edit or proof their own writing properly. They are just too close to the work.