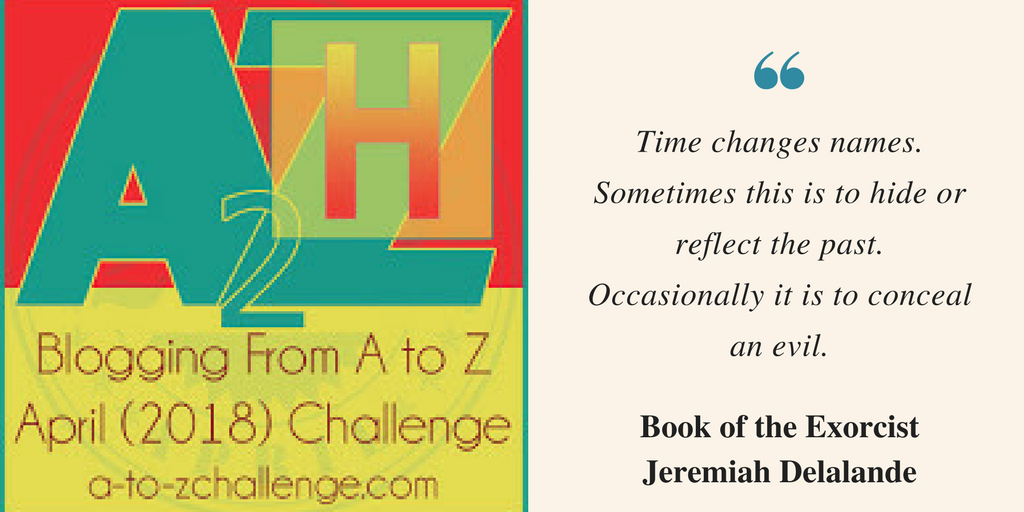 “Sometimes it is easy to consider evil corruption as personal possession, the land upon which people build might hold the malice inherent.” Jeremiah Delalande, The Book of The Exorcist.

The sound of crying seeped through the brickwork, barely audible, but there nevertheless. Elisabeth drew closer, hardly daring to breathe. Gingerly, she pressed a trembling palm against the wall, pressing her left ear against it. The crying subsided into a whimper.

“Are you the girl from upstairs?” she ventured in a quiet motherly tone. Inside she was shaking.

A tiny voice replied, “Yes, are you running too?”

“The thing in my room. It used to come at night.”

Elisabeth felt like something just walked over her grave. Ignoring the obvious question she continued, “Why are you behind there child?”

The weeping began again and between gasping sobs the reply chilled Elisabeth causing hairs to rise on the back of her neck. “They said I was a monster and put me in here to die.”

Swallowing nothing, Elisabeth shuddered, and a wave of empty horror rippled through her soul. They buried you alive. Trying to keep her voice steady she kneeled, still with her palm touching the tomb.

“Why on earth did they think that?”

The child’s voice spat venom. “Because of him.”

The reply was cold as death. “The one you just woke up.”

Extract from “Letters of The Amanuensis – Houghton Fengrave”

Two more candles now illuminated a second desk. Upon it lay charts and overlays of the land now consumed by the Black Marsh upon whose edge sat Marsh Bank House.

In another age the land was pure. A fen created by an oxbow lake that was sealed off as a river to the north forged a new path. Around this grew a hamlet. A mirror of another such enclave in another world on another plane of existence.

Pagan if he read it right.

The Amanuensis traced a finger over the parchments. A heathen chapel and yard of the dead sat on the edge of the lake.

Another showed no water and in a third it was all bog.

“Finally. The Marsh has woken according to prophecy yes?”

That is what I am trying to discern.

“It is rumoured to be bottomless now.”

And if you reach the bottom, you emerge at the surface.

Names, Jeremiah. Why is this place dead?

“And you want to know why?”

The Amanuensis turned each page before him over. Blank sides up, map and ink below. Cast the runes. How did the exorcist know of this? A prophecy too, of the Marsh waking. This he had seen before. A turn of phrase by the ghost child as she ensnared Beechwood.

Jeremiah was before that. Long, long before and his elegy rested above a grave lost within the old chapel grounds beyond the perimeter of the present cemetery holding the bones of a twin.

Significant it was the old chapel? Links to the War Monks, or was that reading too much into things?

He felt the room turn cold. A reflection of the things turning in his mind.

What was missing on the later parchment was the settlement. The bog had expanded and it rested in the depths with only the highest point visible at the centre.

The town by the fen, Bywater, becoming Fenlake, becoming Fengrave. Consumed by the same marsh on another world spilling into this one. Tainting it and dragging across legends, myths and ignis fatuus. Both sides mirrors and at the centre slumbered a madman and a beast.

Is that the naming?

“Because Bywater was lost as the ground fell and all was consumed by the fen water. Your runes speak true. Bywater became Fenlake until the marsh turned black. Read the extract. Bodies cast into the Fen. Another name was made.”

Who built the house.

“That path ran cold. It was not there and then it was. No records anywhere prior to 1586.”

300 years exactly to the day it was fired.

“There is another funny thing.”

The Amanuensis stared long and long. 1286 the year a new settlement died en masse. Women’s, children, men folk and beasts. This he had on record and it was that the Exorcist had referred. 200 hundred found dead. No witness, no explanation, no survivors.

“The stench of decay was remarkable. Under normal circumstances it would take a week to turn the dead this far, and yet yesterday all was well. Traders came in and came out. There is no authentic explanation for such genocide. Even the animals lie rotting. Birds too. A hundred yards wide encompassing this accursed marsh which is now black. Nothing lives, nothing at all. If ‘tis plague then we are all ill-fated now.

The sheriff has ordered everything burned. Bodies, carcasses and homes. Already this has been disobeyed and many have been weighted and tossed into the bog. A mistake, for now they rest in soiled ground, unhallowed and unclean. This is folly.”

There was more, words describing a change in aura, a gathering of darkness, a shift in atmosphere.

876, held myths. Lights out over the bog at night and foul mists drifting inland. Hiding the edges. Cattle lost and drowned, men too. In the Dark came those lost in the marsh their number growing.

And yet, after the house appeared, silence fell. Only the house drew the ghosts and fiends within. Rooms that swallowed people, cellars with bricked up monsters and Elisabeth Beechwood, the woman who died and wouldn’t leave

It acted like a reservoir, or sump or some magnetic contraption that kept the marsh in check. Wishful thinking. He sighed and wiped his forehead. 1875, the full cycle wakes not again until 2175.

His eyes turned to the future books.

His hand plucked out another. Returning to the first desk he open the pages. The future guiding him to the past in another world and a word…

It was four weeks to the day she became aware that she was avoiding one room in particular. Initially, it was just that, being at the very top of the staircase. It was not the ideal place to set up the main bedroom and nursery. This was settled to be the left-wing, with the right side being for guests.

The room in the middle was therefore undisturbed and could possibly become a study at some later date. However, as time wore on she noticed her path actually swerved away from the door whenever passing in front of it. On one day in particular this thought distilled almost audibly and Elisabeth paused. She put her ear to the door, half expecting to find she was being rather silly. Unfortunately for her things took a turn for the worse.

Come in Elisabeth, we have been expecting you.

It was only a whisper in her head, but bore vitriol and carried a venom that fuelled irresistible despair. It was also incredibly hypnotic, encouraging her hand to turn a polished brass door handle despite her subconscious screaming “No” as she was forced to cross the threshold. Time slowed.

Elisabeth noticed the room looked much older than everywhere else and it was cold, very cold. She shivered. It reminded her of the cellar. Dark, dank and dingy. This room was unloved and desperately in need of renovation.

“Is there anybody in here?”

She asked the question knowing the room was empty, and that the voice had been in her mind. Idly, she wandered toward the window tracing finger tips through the dust gathered on an old dressing table. The view from the window took in the Marsh.

It was as if the random planting of trees in the garden were not random at all when seen from this room. They provided a deciduous corridor, taking the eye beyond the garden and across the wetlands to what looked like a folly. Distant and entombed in overgrowth, but clearly visible from this room. Almost as if it was the only place destined to be able to see it.

From the grounds, only an isolated copse existed far out in the Marshes. Rumour had it that ghosts collected there. Unwary wanderers drowned in the bogs and pools whose souls crawled from the waters drawn to the tiny island of dry land. Elisabeth had considered this to be tattle designed to keep children from wandering into the Marshes.

Staring at it, as she was now, made her rather more uncertain.

Houghton Fengrave evolved over four years from a vague idea, a place-name that was something else for considerable time. I’ve possibly undercooked it’s history here to avoid too many spoilers.

That said the 300 year cycling is new to me. I need to commune with this Amanuensis methinks.