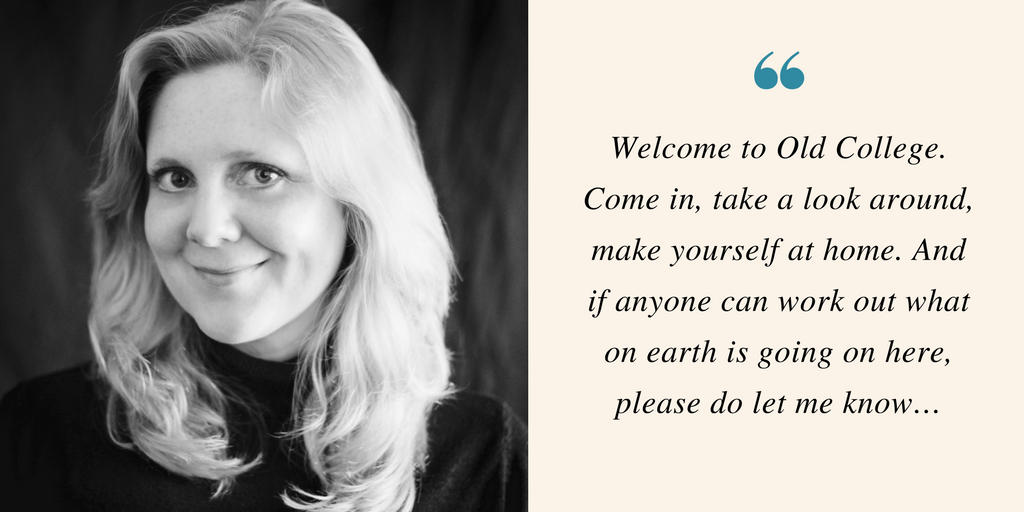 Lucy Brazier is the author of PorterGirl: First Lady Of The Keys, a zany trip through mayhem and chaos as Old College suffers it’s first ever female Deputy Head Porter.

For those of you who have not encountered Lucy’s blog before, then I really think you might be missing out. Not only does it contain the blog version of PorterGirl and the goings on within Old College, but a wonderful saga in a post Brexit dystopia where England is now split into county realms and seedy goings on in “Who Shot Tony Blair?”

PorterGirl is a quirky trip into an elite educational bastion of medieval lore and clandestine tradition, hiding dark secrets and practices seemingly time locked around the fourteenth century.

As the first female allowed into the college, PorterGirl has not only to find a way of fitting in and become accepted, but also uncover the foul deeds that the establishment has conveniently chosen to ignore in order to keep things ticking along as they always have done.

With eyes wide open, she begins to suspect that the sudden deaths of two staff members sympathetic to her cause are not entirely of natural causes. The reader is drawn into a path of incredulity at an elitist modus operandi, travelling with her as the old ways are exposed and a sinister past known only by a select few starts to unravel.

‘Porters are not the carriers of bags, they are the keepers of keys!’

As one of the most ancient and esteemed establishments of the academic elite, Old College is in for something of a shock when it appoints its very first female Deputy Head Porter.

She struggles to get to grips with this eccentric world, far removed from everyday life. PorterGirl, the proverbial square peg in the round hole, begins to wonder quite what she is doing here.

PorterGirl; First Lady Of The Keys is a touching, and at times laugh-out-loud funny, glimpse into a world that is usually reserved for the upper echelons of society.

Whether she is chasing after naked students, drinking copious amounts of tea or getting embroiled in quaint, polite murders, Deputy Head Porter is never far from adventure.

A wonderful blend of absurdity, intrigue and a humorous laugh out loud poke at elitism.

Don’t take my word for it though; check out the reviews on Amazon and, since you are there, take a punt and give it a read.

PorterGirl on Amazon US Edition

And now a sneak preview of the sequel.

I asked Lucy to give me a heads up on “The Vanishing Lord” and this is what came back.

The final edit has since been signed off and the next book is expected to be released towards the end of June 1017.

Having barely drawn breath from clearing out the bodies that resulted from the unpleasantness of last term, our heroine Deputy Head Porter once again finds herself facing another crisis at Old College. One of the oldest and most esteemed establishments of the British academic elite, Old College had a long and bloody history before the arrival of the very first female Deputy Head Porter, so perhaps she shouldn’t be so surprised.

Her first academic year in her illustrious new role (Porters are not the carriers of bags, but the keepers of keys) saw her tackle a vicious and shadowy secret organisation, several murders and the assorted whims of College hierarchy. Now, faced with the unexplained disappearance of a priceless painting and the unexpected death of local dignitary Lord Bernard, there is nothing for it but to don her trusty bowler hat and embark upon another eccentric investigation.

Only slightly hindered by the assistance of an increasingly erratic Head Porter – whose personal life gets more complex by the day – and the terrifyingly unpredictable Dean of College, Deputy Head Porter is soon chasing clues, picking up red herrings and juggling extraordinary adventures with the day-to-day running of Britain’s most exclusive educational establishment.

Further Information About the Author