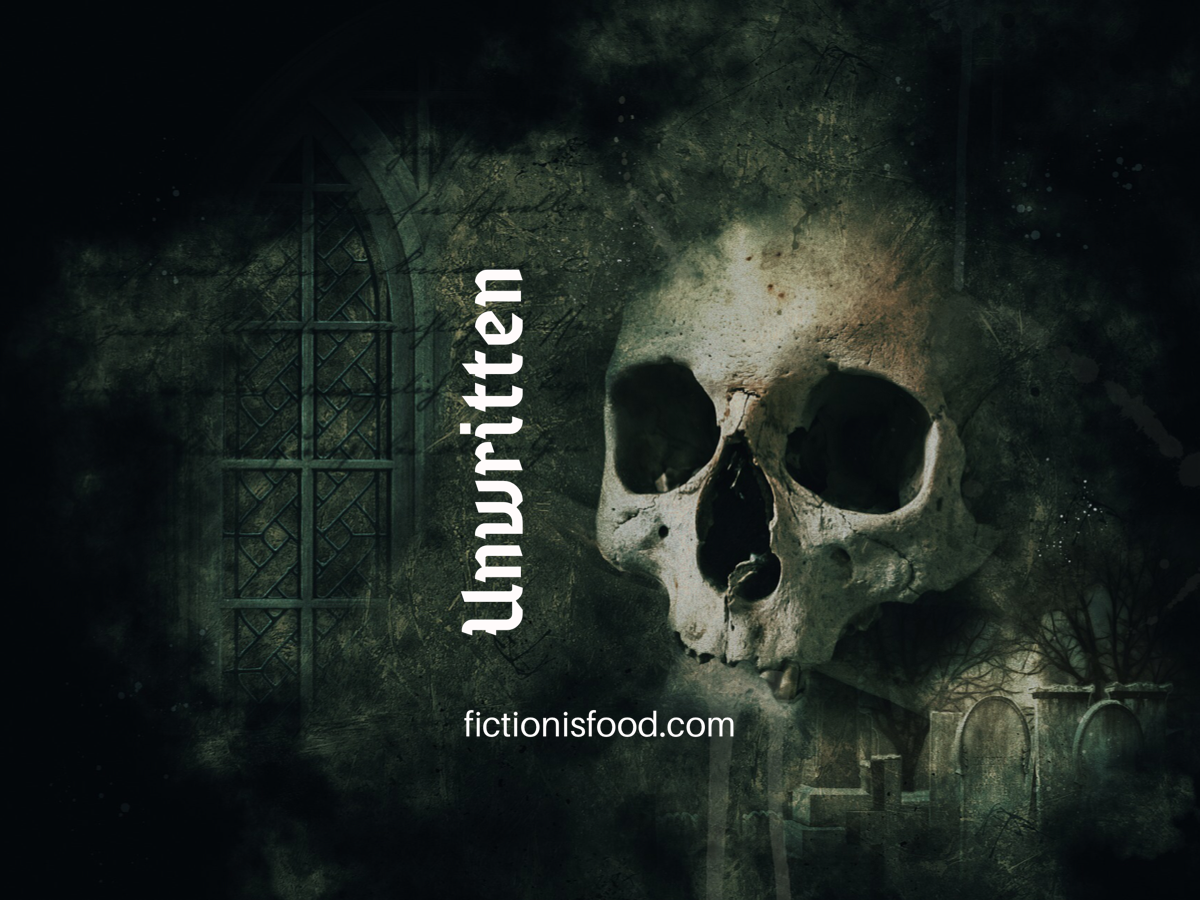 “Ever cross into an unknown tomb to find a highly decorated catafalque then turn and run.” Mysteries of the Undead, Jeremiah Delalande.

Alas why The Castle Weeps remains untold this time round as time skews and both Yish and Naz move backwards to another part of their story. This might be part cheat and part changed. My own time has skewed and caught up in much the same way Lancelot attacks Castle Python in the endless rush…need I actually name the film?

There is an entirely new section however, the Amanuensis has visited another lost soul in Part 3. No prizes for guessing who that might be (Joshua this might be aimed at you).

It struck me afterwards that subconsciously I might have drawn upon Dark Tower VII: The Dark Tower and Roland’s katet visiting their word slinger in Maine.

The word count was lost too, I blame this on Part 3 and lockdown mind wandering. My apologies if the protraction leads to boredom.

Stay safe in these troubles times fellow writers. Let’s face it we, at least, can fill time in isolation with reading or writing. Book recommendations welcome in comments too.

“Bugs,” the Dwarf spat, as was his custom when showing disgust, “I hate bugs.”

“Rich coming from a mine dweller.”

“Not in the deeps of the earth and rock Elf.”

“No, there you dig up things that make bugs look perfectly harmless.” Yish stared into the gloom illuminated by burning torches held in iron sconces placed equidistantly along the tunnel walls.

The debate had raged since entering a cave that warranted exploration. At least according to a map that held a shaft only revealed by the Sorcerer. Like the Cromlech, this was another place that didn’t want to be found.

“Who do you think lit those buggers?” The dwarf shifted his axe from hand to hand.

Caves were his history, life and purpose. Well, they had been in a previous life. Now that was long past. Somehow he’d ended up in an explorer run by a guild in the Keep. It paid well enough. Caves, mines and labyrinths were his skill, and yet this one felt wrong. Hidden underneath magic on a map that was so old even the cartographers couldn’t set an age. The elf, Yish, had seen through it though.

And here they were in an age-old tunnel, hewed by an unknown race in a time no-one remembered with torches lit in expectation of a visit

Yish scanned the walls. Her senses felt drunk. There was powerful old magic here. Confusion and deceit. Something not wanting to be found for centuries had found her mind and opened the door.

“Neither do I.” She mounted an arrow, just in case.

Ahead the tunnel yawned into a cavern. Water dripped into a lake the disappeared in the darkness. Torches lit a path to an island. Yish watched as one by one they burst into flame.

Dwarf and Elf stood at the tunnels end, eyes drifting left and right. Stalactites glistened above. Some were immense and shone like dragons teeth in the torchlight. None appeared to have let go of their anchors on the rock high above.

“Its all wrong Yish, even her the earth moves and trembles now and then. Some of those weigh tons. They have no natural right to be still attached.“

Something rolled on the surface of the lake. Ripples fled toward the shore from the darkness. Yish drew her bowstring tighter by instinct. “What do you think that was?“

“A sign,” he replied, axe now resting on his shoulder

“We should leave.” He exhaled and watched his breath fog. The air was cooling fast. “Now.”

The Dwarf glanced across, then followed her gaze and froze.

In the centre of the lake there was an island and upon that rested a coffin. Not any old dead box. This one was black and trimmed with silver. Highly polished wood, it might be oak, but at this distance the Dwarf couldn’t be sure. It might even be granite, obsidian or ivory for all he knew. Not that his attention was lingering on construction. That would be the noise of a seal being broken and mist begin to drip down the sides of the catafalque.

“What are you?” The sanguisuge leered at the sorceress before him.

Never had anyone failed to tremble or give up their gaze knowing the end was close and likely to ebb as blood flowed. This creature stared him down. Held his gaze. The hypnotised hypnotic.

Speak fiend. The words crawled through her mind.

The witch remained silent as her eyes bore into the vampires mind. Ice flowing through it’s skull. She felt panic and terror inside a beast that didn’t know it. Or had forgotten it’s meaning somewhere long in the past.

“Have you any last words? Regrets? Confessions? Anything vampire?”

He flowed forwards. Yish didn’t flinch, holding her ground. Their eyes remained locked in a battle of wills that the ancient undead was losing.

Yish curled her hand around the claymore resting in a shoulder scabbard. The vampire broke his gaze as she drew the edge upwards. Uncertain he moved back.

“Bastard am I? What would you know of that?” The claymore sat partially drawn.

He moved around her, swirling in partial mist blending with shadows flickering in sconced torchlight.

“You came alone. Is foolishness also a trait?”

Yish drew the claymore and slashed downwards. The mist solidified and the vampire let out a howl as an arm fell to the floor.

His eyes flared and a snarl ripped across the vampires face. “You,” he whispered.

She held the bloodied sword blade against his neck. “Aye, it is me.” She spat on the floor in disgust, a habit subconsciously picked up from the dwarf, before adding “Father.“

Nahar laughed, his dwarven frame rippling with mirth. His fist slammed into the oak table he was sat at. Plates rattled with the impact.

“What did the beast say to that then Yish?“

The sorceress drank from a goblet. She was used to wayfaring inns and this one was homely, not luxurious. A fire, good company and hosts that knew when to listen and when not to.

“One word that explains much.”

“Which was?” The Dwarf recovered his composure and poured more ale from an earthenware ewer.

“Then you hacked his head off and burnt the corpse.”

“Yish, tell me the world is one less blood leech.“

The sorceress smiled and raised her goblet. The dwarf reciprocated, knowing she was stalling.

“Cheers Nahar, may your days be long in number.”

“At some point in life the question of who or what am I inevitably appears. Neither sorcery or longevity keep the inner voice asking. Most species create gods and religious orders to offer hope. Whether this is real or misguided is not known. Savagery and war resulting from them are. It is for each individual to consider this question without indoctrination. Never forget though that life is precious. Even if it takes a sour turn and despair looms. That is but one turn of the wheel. It is life. As are hope, love, happiness, sadness and tragedy. Embrace them all for they will surely embrace you.” Jeremiah Delalande. The Philosophy of Life.

Extract from “Letters of The Amanuensis – The Wordsmith.“

“I anticipated this as part of your searching.”

Am I merely a figment of your atrophying imaginations?

“What do you think?

“Then you have your answer.

Then Wordsmith should be replaced by Chronicler.

“Agreed, I am nothing more than a biographer, a Scribe in your terms.”

“That has yet to unfold. I write as it happens.”

No powers of foresight at all?

Do you see all worlds, all permutations and courses of action?

“No. I see things as they unfold. I journeyed with the wizard, was with Wayland and when he met The Black, walked with Rose in her dreamscape, Dave as he sat at the graveside, Joseph as his brother fell.”

And me, Chronicler. What do you see while here?

“An enigma. A prisoner not knowing who or what he is. You control your destiny not me.”

And my past? Have I lived that or have you merely contrived it for me?

Again, these things remain unwritten. It is you Amanuensis that has not shown me your past yet.”

Then what lies in the Vault remains unknown?

“There are two that know.”

Let me use foresight. These two are unwritten yet also.

And Yish. What know you of her?

“That, I will not answer. I know Yish and you must wait until paths cross to discover the connection. Broach the subject thereafter.”