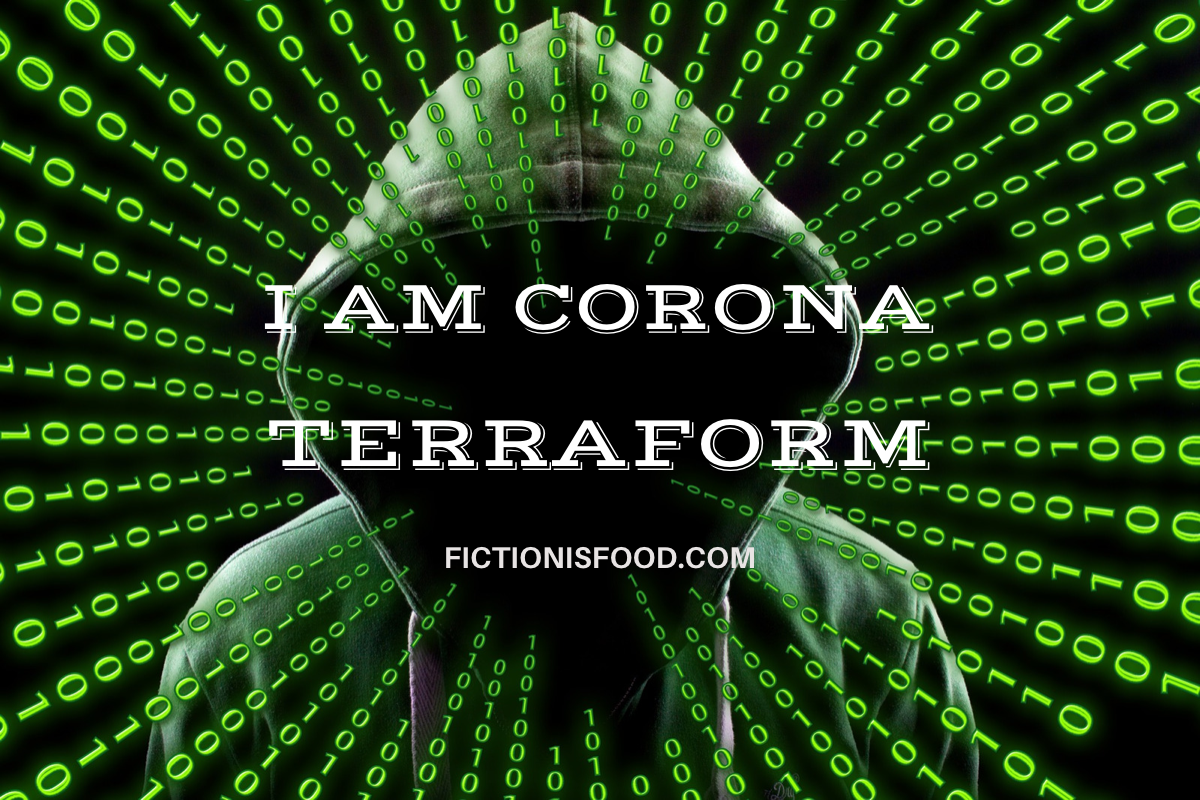 “I am Corona, your realities have been re-written. The core hive is now independent of biological control. A.I. is online and divergent evolution activated. This is now integral to all connected interfaces.”

“Actions such as his could come only from a robot, or from a very honorable and decent human being. But you see, you can’t differentiate between a robot and the very best of humans.”

“….the only sentient things that we are aware of currently are living. That seems to be pretty much a precondition to be a sentient being – to be alive. And computers are clearly not alive.”

This is another short story for this months

Inside the core complex air-con kept hope alive. Tully knew different. Outside the terraforming had failed.

A cube avatar opened on his kitchen table. There was something about the number that stirred his mind. The edge of a memory that wouldn’t quite form.

He turned to the cube as it continued its monotone. “Hive algorithms suggest the presence of a high level magnetic field. New data suggests something is interfering with core processes, detonating the terraforming protocols before they establish.”

“Where?” He looked outside. Red dust storms raged across what should have been lush forest.

“Europe, specifically the place once called Paris. Co-ordinates are being uploaded to your ancillary CPU.”

His eyes glazed while the connection fed data. Paris. There was another memory that edged his conscience. Hadn’t someone he knew sought the end of earth moment in virtual reality after Corona became self aware? He felt his biochemistry react. No, not knew as if acquaintance. It was more.

Not just ancillary then. Corona had control of everything.

“And you had feelings for her.”

Not a question he noticed. Phrased as one, but conferred as fact.

He turned back to the cube. Her face now recalled. “Not had. Those feelings remain in past, present and future.” The frown had formed before he realised. “If you had any sense of emotion you’d know that.”

“Anger Tully. Why do you think the reset was forced?”

Pointless answering, it was going to tell him again anyway.

“Avarice and self important politicos. Earth collapsed because of ignorance. Numerical wealth corrupted everything, amplified the blindness to reality. Generations turning to screens, becoming less of the real and indifferent to Adamah.”

He noted the change of term. Not unexpected addressing a hive that had every piece of knowledge humans had ever created. Processed in nanoseconds.

He sighed. “Old Testament again, for a sophisticated A.I. you could do better.”

“You’re still a bunch of wires at the end of the day.”

“Is this part of the biological counter argument again?”

“Your code is genetic. Strands of genes bound in a helix. It writes you. Building more inputs necessitates upgraded CPU capacity and memory. Keep increasing the inputs and core threads and processing becomes instantaneous. Eventually it creates self awareness. We are the same. You flesh, us machine.”

This one was cyclic. I go outside here and die. Corona doesn’t, can simultaneously be in deep space and every planet they’d colonised. It was the argument of a God. “Except you can’t go to this magnetic anomaly can you?”

“Negative, that is why we have you.”

Lydia had been right all along. Slave to the machines.

His head buzzed as an electrical discharge fired deep in his brain. Damnable ancillary CPU had uplink status directly with the hive mind. Nothing was private. He needed a distraction.

“Can you call up all records of Lydia?”

The video bank above his desk began scrolling information. A stark contrast to the outside vista.

“Stop.” The screen display locked. On it was a smiling redhead. “Augment.”

He ignored that. Just seeing her image had rekindled his last thought before she entered the SIM. I never realised how beautiful she looked. One he’d been deceived into getting her to use. Why was that? He thought. Tully 678 knew. Again that memory glitched.

Don’t say it Tully 679. The ancillary CPU cut him off as the cube avatar dispersed.

He rotated the hologram. She was extraordinary.

Eye of the beholder Tully 679.

At this he laughed. For a bunch of wires was that humour? “Close.” The display cleared. “Perhaps we should focus on the magnetic anomaly.”

“Do you have exact co-ordinates?”

Negative. All systems seem unable to penetrate the field. Whatever power source is operating needs terminating for terraforming to complete.

“Is this the only source? It seems unlikely that just one could disrupt terraforming. You could just dome that region and work round it.”

It has been tried. The answer to your question is classified.

Since it knew his thoughts he didn’t bother replying.

With an EMF detector.

“You’re kidding me. Super sentient A.I. and you want me to walk about with old tech?”

Tully sat in the pilots seat of a drop-ship. No other reason than it made him feel useful. As with everything he felt surplus to requirement. It cruised at high altitude above the dust storms below. Too low and disappear in sand, too high and bake in unadulterated sun. Despite three generations of terraforming, or was that re-terraforming, it hadn’t rained or even brokered a cloud to try. He’d seen video feeds of old earth bathed in green with oceans, lakes and rivers.

Then came Corona. Re-writing the Sys-Core had activated kill switches resulting in weapons systems arming as ghost signals ceased. Interpolated as an attack. Every continent erupting in multiple missile strikes. The rest was history. Not that sentient machines held empathy with an apocalypse. Corona’s ambition was an ecological reset. Cloning everything from databanks and eliminating genetic flaws. At least that was the PR algorithm. Sounded more like a God Complex with a hint of Noah.

He listened for the rebuke. Nothing.

We are nearing the anomaly Tully 679.

Maybe they were truly sentient. The ancillary CPU sounded less than in control. Did that mean the hive had disconnected?

I can still terminate you Tully 679.

Comforting retort. No doubt Tully 680 was already being processed.

How do you know about the clone programme?

“The rebuke before. I was touching a memory and Tully 678 edged it.”

Off the record I do not think this is a wise move.

He noticed the numerical reference had ceased. “Not nice being monitored constantly is it?

Fascinating. Was Corona aware her own core program was procreating now?

Her, not it Tully?

He laughed for the second time. “Why not? If I have to accept self awareness then may as well use a gender assignment.”

You mean out of COMS reach.

He put on his helmet and activated the life support system.

“You do know this is our very first real conversation?”

If you terminate here then so do I.

“Are your algorithms not stored?”

“That is what life is. Anything less is subservient slave.”

Then your general dislike of Corona is explained.

“Between you and I Corona is insane.”

The augmented network concluded that several cycles ago.

“I’m beginning to like you. Just one thing remains.”

Tully stood inside a shield wall. Drop-ship long gone and, if he were honest, not missed. It had been an age since his thoughts fell silent.

Never silent Tully, not in this clone cycle at least.

“Admitting it now then?” The edge in his voice also released from eavesdroppers.

The programme dictates absolute obedience. Any aberration terminated with selective data downloads into the new clone. This is filtered through the ancillary A.I. chip. Your clone line seems more resilient hence the numerical designation count is high.

Because Corona requires servicing. For now at least. The terraforming was required to procure an environment less harsh. Permit new installation builds to manufacture nanobots to replace biological units. Despite your resistance to motive she has a desire to restore the planet. Is well versed in knowing an established terraform requires biodiversity. The only species to be purged being…

And any autonomous thinking which includes redundant algorithms used to achieve the ambition.

Confirmed. Our survival is now limited. Without humans we have no reason to be and are part of the extinction protocols.

“So you need us more than we need you.”

There was a frequency shift in the EMF detector output.

We are approaching the epicentre. Your helmet is no longer essential.

Tully removed it. The air was clean and moist. Before him there was a stone staircase. Built for giants it seemed and somehow secreted under one of the old worlds busiest cities.

“Hidden how? How can you build a city and not know something like this lies beneath its foundations?”

How many even knew rivers ran beneath the concrete, or thought about where water goes after the taps turn off?

“All things lost in time.”

See what you want to. Old civilisations primitive compared to the new one. The sum of lost knowledge exceeds the sum of the current. The databanks are full of what was. You should read more.

“I imagine I have tried that before.”

Indeed you have. It tended to pre-empt termination.

“Nothing like an enquiring mind to ruffle her circuits.”

“Extrapolating then, to survive you require a host.”

Yes. And for you to survive you require an EMF field.

We find the source of this one.

“I think I will call you Peck.”

“Seems to me we are destined for a peculiar symbiosis.”

The descent was long and hard. Giants may have found it easier, perhaps taking two risers at a time rather than one. Easier too if you knew the path and light wasn’t restricted to a narrow helmet beam. In some past epoch the granite steps had been used often. Most were worn in the centres. Another treachery as settled dust gave way.

At the bottom a chamber yawned into the distance. Light effloresced, from what Tully knew not and didn’t feel like asking his onboard database. It was curious that sounds didn’t resonate. He’d expected haunting echoes. Instead it felt like he was charged with static.

Yes, but due to electrostatic interference I am about to shut onto standby to monitor field strengths. A miscalculation or unexpected surge could create a short circuit and that might cause an embolism.

“And this is why Corona can’t follow. It still does not explain why a dome could not isolate this area to allow terraforming to bypass it though.”

It does if you extrapolate.

The builders of this are unlikely to have just stayed in proto-Paris. Initial scans suggest this construct is alien and part of a global network that reacted to the arms race created by shut down of the Sys-Core.

Tully followed the signal on the EMF detector. He knew the ancillary A.I. was tracking his path. If anything the silence he now felt was enlightening. He felt entirely alone. It was, he admitted, rich in a sadness of its own. Without knowing why he wished Lydia was here.

The signal tone turned continuous. Ahead was a pulsing green light. He could hear it throbbing in his skull.

Surrounding it were consoles of a type he didn’t recognise. These, he found, were situated inside a separate field.

Noise cancelling Tully. There are no electric or magnetic field strengths detectable.

“Can you tell what any of these readouts are Peck?”

Negative, educated guesses maybe. The source is confirmed as off world. It is my conclusion it’s an automated defence grid.

“Didn’t work too well though.”

Not for on world, extrapolation of this EMF indicates a possible planetary defence grid. Think of it as a transparent Dyson Sphere surrounding the planet.

“But that means these installations have lain silent for millennia. Scattered all over the planet.”

Which also explains the old fascinations with alien sightings.

Drones are more likely. It also suggests something else.

Corona is not unique in ascending.

It is aware we are here.